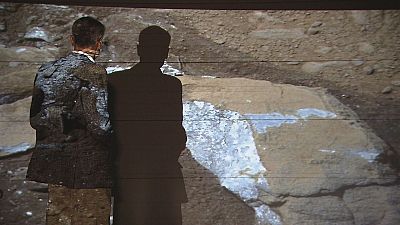 Europe’s off to Mars – again.

Why? We asked Olivier Witasse, Mars Express Project Scientist with the European Space Agency: “If there was life somewhere other than Earth, then Mars is the obvious choice.”

We have sent robots to fly over Mars, crawl over Mars, and soon to dig down into Mars – searching for signs that once, perhaps deep in the past, this planet may have been home to life. It might be an obvious choice, but still a puzzle, and one that we’re only just beginning to piece together. And finding evidence of life will require the skill of the finest detectives.

Our understanding of the planet Mars as a whole, has progressed in leaps in bounds in the past decade. The European Space Agency’s ‘Mars Express’ has been crucial to that advance. The satellite has just celebrated a decade in orbit around Mars, gathering data to allow scientists to make 3D animated maps of the surface, and to spot where key minerals and features are to be found.

Olivier Witasse, Mars Express Project Scientist from the European Space Agency points to just one discovery, which may have major implications: “There’s been a huge number of discoveries over the last 10years. If I had to highlight some then I’d start with the detection of what we call hydrated minerals, that’s to say minerals that were formed in the presence of water, and that shows us that there was water on the surface of Mars for many millions of years.”

The widespread discovery of these hydrated minerals across certain areas of Mars has intrigued specialists. Once they find where those clays and sulphates are, they’ll find where water once was.

The first photos of Mars from the Mariner 4 space probe in 1965 fed the intense speculation over water and life, next the Viking missions did more exploration in the 1970s.

A succession of small rovers followed, until last year NASA’s MSL mission landed a rover called ‘Curiosity’ on the Red planet. It was basically a 900 kilo mobile science lab capable of scooping up rock and analysing it internally. Crucially Curiosity’s mission is not to look for life itself, but instead to look for indications the right conditions for life were present.

The most important part of ‘Curiosity’ is a laser known as ChemCam. It was conceived, designed and tested by engineers in the US and Toulouse, France, and its job is to shoot a laser at rocks and then analyse the plasma gas given off to so as to understand the composition of the rock. A test version at the University of Toulouse Paul Sebatier is used to calibrate the ChemCam which is on Mars now.

Bruno Dubois, Mechanical Engineer, Université Paul Sabatier Toulouse explained that they use something called the Martian chamber, and so “We put rocks inside it, we create a vacuum, and then we fill it with gas from a bottle which contains gases similar to those in the Martian atmosphere. And that allows the plasma gas to be created on the rock under the same conditions as on Mars.”

Curiosity has already made its mark on Mars – quite literally. ChemCam can fire lasers at targets up to six metres away, testing them to see if they could be of scientific interest. If they are, the rover moves in and drills a small sample.

ChemCam Co-investigator, Olivier Gasnault, told us about one such journey for the machine and outlines the thinking behind it: “We went to a little basin which looks like an ancient lake. And that allows us to ask questions about whether life could have existed in the area. That’s to say, did we ever have the climatic conditions for life – if life can appear somewhere other than Earth – could life have appeared there?”

Curiosity’s quest for to see if the right conditions for life ever existed appears to have been successful. In the place where it landed, there was once water. It was the right temperature, with the right acidity, for the right amount of time. But about three billion yeas ago that all changed, when Mars’ magnetic field faded and the atmosphere drifted away.

Anouck Ody, a Post-Doctoral Researcher at the Université de Lyon, said there is still water on Mars, but it’s frozen: “Mars has an atmosphere that’s too thin, with pressure that’s too low for liquid water to be stable on the surface. But you do find water in the atmosphere and in the form of ice, so we mainly have ice at the polar caps, and that’s water in the form of ice on the north pole and there’s also some on the south pole.”

Mars Express also discovered there are deposits of ice beneath the planet’s surface, hidden by dust. And it also appeared to find something else – something even more mysterious and intriguing: methane.

Olivier Witassen a scientist from the Mars Express Project, discusses this fascinating possibility: “In 2004, right at the beginning of the mission, Mars Express showed that there was methane in the atmosphere in very small quantities. There are still discussions about the veracity of these observations, but if methane is there it has to be explained – because in the atmosphere, methane is destroyed. Therefore you need a methane source permanently emitting this gas. There are lots of discussions about what the source of this methane is. It could be geological activity, reactions between underground rocks and liquid water so creating the methane. This would mean Mars is geologically active. Or it could be biological activity generating this methane.”

This is a mystery that Europe’s ExoMars mission is ready to solve. In 2016 it will have a satellite in orbit around Mars, designed to test for methane, and by 2018 this rover will be rolling around the Red Planet. The mission will be the first to set out with the direct intention of finding signs of life, now, and in the past. The rover’s drill will be able to collect samples two metres beneath the surface.

There is huge scientific debate over where to land the ExoMars rover. It is thought any form of life would have been active around four billion years ago; so the best locations are ancient valleys where water was present for a long time.

At times Mars seems to be a frustrating neighbour, one whose secrets are often cloaked in dust and and buried in time. Yet we are making rapid progress in piecing together the Martian puzzle – a puzzle that could also reveal a great deal about Earth.

Damien Loizeau from the Université de Lyon posed some interesting questions: “Did life start several times on Earth? We probably had the conditions for life to appear in several different places on Earth, so did it appear in several places at the same time? Did it appear, disappear, re-appear etc.? If we could see that on Earth, it would mean that, if the right conditions are present, it’s pretty easy for life to appear.”

ExoMars Project Scientist Jorge Vago concludes: “We don’t know if life started on Mars, but if it did start, it must have been the type of life that digests chemicals, or minerals. So not photosynthetic bacteria like we have today, producing oxygen, but more like the very primordial type of life we had also in the very early Earth.”

And the final word from Anouck Ody the Université de Lyon researcher: “We think that the main ingredients were present on Mars a long time ago – but is thinking enough? We don’t know, and if we find life then we can finally say that it is enough, and if we don’t find it then the mystery will endure.”