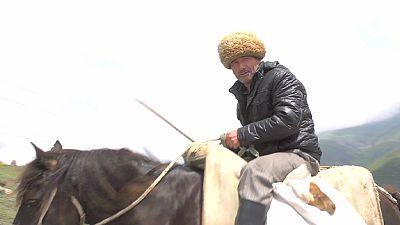 The Caucasus region is a crossroads of more than 50 ethnic groups and a variety of religious beliefs. Many of these populations have inhabited the region since ancient times.

The World Forum on Intercultural Dialogue is currently being held in Baku, Azerbaijan. An event where religious and opinion leaders have gathered to discuss problems relating to the relationship between different cultures and religions.

Azerbaijan is one example of this Caucasian cultural mosaic, where Ethnic and religious coexistence is a major concern.

Rev Canon Alistair Macdonald-Radcliff from the Anglican Church explained: “There is a lot of tension that we capture when we look at the globalisation and whether the homogenization of the global culture is something that is challenging and the way that people find it threatening on their local communities and their local identities. That’s a very large part of the tensions that we discern. So we have to explore how to be authentic in our local identity within this greater context”

In the Caucasus it is still possible to find extremely isolated communities. Euronews went to Khinalig, a village located at an altitude of 2300 metres on the Azerbaijani side of the Caucasus mountain range.

The people from Khinalig belong to the Kettidt minority and speak the Kettish language. Some of the people also speak the majority Azerbaijani language.

The village, with around 2000 inhabitants, is the oldest and most remote in Azerbaijan and among the highest human settlements in Europe. The people are Sunni Muslim, living in a secular country with a majority of Shiite Muslims.

A local villager spoke to Euronews about the community saying, “It’s very important to preserve the history, the culture and the language of this specific ethnicity, our ancestors lived here for 6000 years and it is important to show the world that we have such small minorities still living here”.

Khinalig is located in the Region of Quba in Northern Azerbaijan. It has recently gained a reputation as a trekker’s paradise and the people of Khinalig have started renting rooms to foreigners who like to get off the beaten track.

Qirmisi Qasaba, meaning red settlement, is just across the river in the city of Quba in the ancient Jewish part of the city. The local inhabitants are known as Dagyahudi, literally meaning “the mountain Jews”. The people speak Juhury, a language made up of 70 per cent Farsi with elements of Hebrew and Turkish.

According to some sources, the Jewish community were brought to Azerbaijan by the Persians and settled around 500BC. For many years they have lived alongside the Muslim people, in this part of the Caucasus the Middle East conflict seems far away.

Rabbi Elazar Nisimov spoke on the issue, “We know that this conflict is temporary. We are structurally the branches that come from the same root. We are the branches of this single tree, both Muslims and Jews, here everybody understands that.”

One Jewish community that Euronews spoke to often meet to discuss local problems and the relationship with other communities.

The leader of the Mountain Jews, Boris Simanduev, is eighty years old and is used to dealing with the other religious institutions. Despite the mutual tolerance, the two communities do not mix, they simply coexist without any tension.

“In 1995 I started working here as Imam, and since that time I started cooperating for the improvement of relationships with the head of the Jewish community” said Haci Naib.

Sitting beside him, Boris Simanduev, head of the Jewish community of Quba added: “In Quba’s Red Settlement there are very few marriages among Jews and Muslims; it’s a very small percentage. But some mixed marriages exist”.

The Baku World Forum addressed some of the many challenges that arise in intercultural dialogue, from conceptual frameworks and governance to policy and practice.

The event has also taken responsibility for delivering the Global Agenda for Dialogue among Civilisations which was adopted by the United Nations General Assembly in November 2001.

Overall the Forum also hopes to convey the message that tolerance is possible. A difficult task considering the thousands of unresolved religious and ethnic conflicts still raging across the world, as well as in the Caucasus.