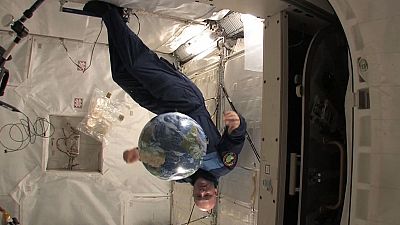 Every day, 400 kilometres above our heads, there are astronauts living in space. Their home is the ISS, the frontier outpost of human exploration, and a workplace like nothing on Earth.

With spacewalks and dockings to contend with, the responsibility is huge, as Italian astronaut Luca Parmitano explains: “We are still the last line of defence against any malfunctions. Especially when we are really close to the station, the time it would take for the ground to send a command to that machine in case something goes wrong would be too late.”

It is also a home like nothing on Earth, as ESA’s André Kuipers found when he spend six months in space last year: “Sometimes when you close your eyes and you go to sleep and you see a stripe or some flashes, and you go oh, I’m being hit by radioactive particles, your retina is hit, it happens then everywhere on your body.”

“I’m qualified as the main operator, and when the ATV arrives on the station what I do is I monitor the distance with a ruler, making sure that what I see and what the computer thinks he sees are the same. I also check its rate of motion, so that it’s not too fast and not too slow, and should something go wrong I am the last line of defence, and I can send a command to stop, delay or completely abort the rendez-vous,” he explains.

The astronauts are watched closely as they train, and then watched as they work on the ISS. If a European is in space, there is always someone in Cologne to keep a careful eye on them, monitoring their health status and the status of the technical systems that maintain their wellbeing.

The astronauts on the International Space Station follow a steady, pre-defined rhythm of work and rest, to make sure they do not get over-tired.

Frank De Winne, the Head of the European Astronaut Centre, says one of the biggest challenges is to pace yourself: “Of course in the beginning you’re very excited, you want to do everything very quickly, but it doesn’t work, you can’t maintain this rhythm for six months, you have to pace yourself, and you have to try to maintain a stable kind of mood, a stable type of working rhythm.”

The astronauts’ main task is science work, acting as the hands and eyes of the scientists on the ground to complete their orbital experiments, and being part of that experiment themselves, with their bodies and minds studied and recorded as we explore how humans adapt to living in space.

One of the ongoing experiments on the ISS is called Energy, and Luca Parmitano is one of the subjects, with tests before, during and after his flight. Frank Salmen, a payload instructor at the European Astronaut Centre explains that the experiment will measure “the total energy expenditure of a male astronaut on a long term spaceflight on the ground and in microgravity”.

The long term vision of agencies like ESA and NASA is for astronauts to travel further into space for longer periods of time. For that reason one of the central themes of research is to understand how our body reacts to living in zero gravity, as muscles and bones that aren’t under stress just waste away.

Volker Damann, Head of Space Medicine, European Astronaut Centre, has studied the effect closely: “The lack of gravity negatively impacts our muscular system, our skeletal system, and that is the big danger that they lose bone mass over time, it’s in the order of one to two percent per month, so after six months you have already lost a significant amount of your bones, that is certainly a long term effect.”

The only hope to maintain muscle and bone is to do exercise: cycling, jogging, and weightlifting. The bones of an astronaut who spends six months in space will take six months to recover.

That makes coming home difficult, according to ESA Astronaut André Kuipers: “The biggest physical challenge is coming back. Of course your body adapts, you go to space, you don’t feel too good the first few days, you have to adapt to weightlessness, but coming back is even worse. You have to adapt to the planet, to gravity, so you become Earth sick.”

“You have problems with muscle soreness. For three months I had muscle soreness, so all kinds of small muscles that you normally use you don’t use any more in weightlessness. I mean, we do a lot of sports, but even that is not enough for small muscles, for example in your ankles, for balancing. You don’t balance any more, so for three months I had muscle ache,” he says.

Another occupational hazard of life in orbit is space itself, and all the highly charged particles of radiation that bombard the ISS.

That kind of radiation exposure could lead to cancers such as leukemia, but for the moment the medical team has yet to find any long-term effects of spaceflight. Damann and his team watch them closely: “We continue to monitor the astronauts over a long period of time, to retirement and even beyond. We pool the astronauts, all the data worldwide of all the astronauts is put into a database, and we try to identify specific medical issues that may be related to the occupation of an astronaut.”

It is an occupation with risks, but also huge rewards, and the view from the window is out of this world. Parmitano is looking forward to his voyage of a lifetime: “The astronauts that are on board now that are good friends – I was their backup only a few months ago – they just tell me all the time that time flies, and it is such an incredible experience that six months go by in the blink of an eye, so the biggest concern is to try and make it count for every second and to create memories while they are up there.”