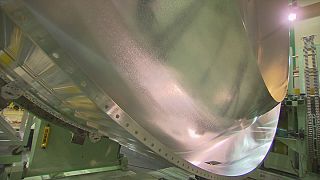 The launch of a rocket is the crowning moment, the culmination of a long process of careful machining and construction. What comes out of a rocket factory is a unique blend of power, scale and engineering skill.

“To give you an idea of scale, the thrust at lift-off of a rocket like Ariane is like the power of two units of a nuclear power station, and the turbo pump that feeds the rocket engine has the power of a TGV,” says Michel Freuchet, Head of Launchers at Astrium, near Paris, where the Ariane 5 launcher was born.

Piece by piece, it is hewn from solid aluminium and brought to life. The central structure of Ariane 5 is made from huge sheets of top grade aluminium. Aluminium is used as it is best suited to withstand the extremely low temperatures of the liquid hydrogen and oxygen fuel. One by one, the panels are machined into shape – with many areas as thin as two millimetres thick. Over ninety percent of the aluminium is removed and recycled, leaving behind the purest and most perfect central part of each panel.

There are currently three main European launchers ready to rocket into space.

Ariane 5 is the biggest, capable of lifting 10 tonnes into orbit. Soyuz is the Russian workhorse with a three tonne payload, while Vega is the European Space Agency’s new rocket, designed to take one and a half tonne satellites into low Earth orbit.

Faced with increased competition from the Far East and private companies in the US, the European Space Agency is currently treating Ariane to a make-over. The Ariane 5ME, or Midlife Evolution, will be able to combine the launch of communication satellites and scientific missions.

Looking ahead a decade, some of the new technology in Ariane 5ME will be included in its successor Ariane 6. The European Space Agency sees the evolution as a strategic move to meet the demands of both commercial and science customers.