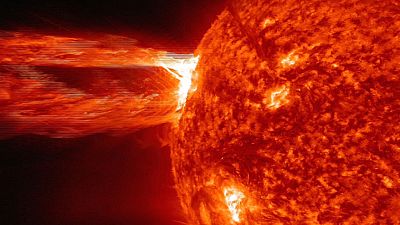 What causes the violent explosions on the Sun’s surface and our communication systems to occasionally go down?

How do the Sun’s mysterious magnetic fields behave?

To this day, researchers remain puzzled by the Sun’s complex physics.

Even the biggest terrestrial solar telescopes, like this one on the Canary Islands, are simply not powerful enough to understand our star’s moody behaviour.

So European astrophysicists have a dream.

“It’s not enough to observe the Sun’s magnetic field throughout the course of a day. You need to to be able to observe it several times an hour in order to understand what causes a solar explosion, for example. So what we need is a very large telescope, that would provide us with detailed imagery four to five times more precise than what we have now,” says Bernard Gelly, an astrophysicist at the French National Centre for Scientific Research (CNRS).

That’s the aim of the scientists working on an EU-backed project to develop a new solar telescope, that would help them better understand some of the Sun’s elusive physical and chemical processes.

The chosen location is the Canary Islands, considered to be one of the world’s top astronomical sites thanks to ideal weather conditions.

The telescope will be equipped with a 4 meter-wide mirror.

“The quality of the pictures we get from the Sun is disturbed by the Earth’s atmosphere. Very often, we just don’t see clearly enough. That’s why the future European Solar Telescope will have what we call “an adaptative optics system” that will correct, in real-time, the deformations caused by the atmosphere,” says Manuel Collados, coordinator at the European Solar Telescope project at the Canarias Astrophysics Institute.

“We currently know what regions of the Sun are more likely to develop those sudden, huge eruptions and bursts of energy. We are even able to determine whether those eruptions will happen in one, two or three days. What we are currently unable to tell is when exactly they are going to take place, and how violent they are going to be,” adds Manuel Collados.

Scientists also hope such a telescope will help them better understand how the Sun’s energy is created at the core, transported to its surface and finally liberated into the space.

They are convinced such knowledge could have huge implications for our daily lives.

“The Sun produces energy through a reaction known as “nuclear fusion”. We think that this source of energy could one day become the answer to the energy crisis here on Earth,” says Héctor Socas Navarro, astrophysicist at the Canarias Astrophysics Institute.

“In principle, it is a clean source of energy, non polluting, and virtually unlimited. Major research projects are currently underway to try and reproduce that same energy source in reactors. If successful, this research could provide a vital solution to the current energy problems faced by humankind.”

The European Solar Telescope project is still in its preliminary stages.

It could see the day in 2020, providing scientists with a unique tool to unravel some of the Sun’s deepest, darkest secrets.