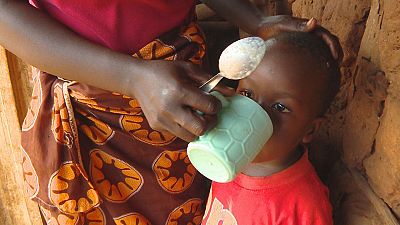 In a part of southern Kenya where malnutrition is rife, Stanley is an active three year old boy.

Along with hundreds of other Kenyan youngsters, he is part of a research project aimed at fighting child malnutrition in Africa. The findings so far have surprised researchers.

School dinners at a school in Kibwezi include an unusual experiment.

Scientists are looking at two varieties of cassava, a major source of carbohydrate in Africa.

Elise Talsma is a nutritionist from Wageningen University in the Netherlands. “In Sub-Saharan Africa, 70 per cent of the intake comes from staple food like cassava, or maize, or millet, or sorghum,” she told euronews, “but those staple foods don’t contain a lot of micronutrients. So if we can increase the micronutrient content of this food, that could have a great impact.”

Yellow cassava is richer in vitamin A than the white variety, but there is less of it about.

Scientists want to know if including yellow cassava in the diet regularly would improve the health of malnourished children.

So researchers pitched in for some science-based cooking.

The cook at Thange School, Regina Mbula, told us: “We peel and boil white and yellow cassava separately for around 45 minutes. We then add vegetable oil and mash to get yellow and white cassava puree.”

Both types of cassava mash are then served to different groups of young volunteers. For some, it is their only proper meal of the day.

An assistant at the school, Ann Mueni Mutuku, explained: “Each child gets the same amount of food every day, during the study, depending on their ages. It is between 375 and 400 grams for the younger ones and 425 to 450 grams for the older children.”

Yellow cassava has higher levels of betacarotene, a pigment that the body can easily convert into vitamin A.

Researchers think that yellow cassava can provide children with around 50 percent of their daily vitamin A needs but they need to confirm that in the lab.

Elise Talsma told us: “We can quantify (cassava) intake. And then we can hopefully see how the levels of vitamin A are increasing in the volunteers’ blood. In that way, we know how much betacarotene increases those levels. So then we can calculate how good (sic) your body absorbs the betacarotene from the cassava.”

Vitamin A is just one of many micronutrients that African and European researchers are investigating in the fight against child malnutrition in Africa.

In his village near Mombasa, it is Stanley’s lunch time.

His mother laces his normal maize-flour porridge with a special blend containing an iron supplement.

Scientists want to know if the mineral is improving Stanley’s cognitive development.

His mother Alice Mutala has no doubts.

“Since the study started, I feed Stanley every day with this iron-enriched meal,” she said. “He loves this porridge. And I think that thanks to this he is more active and healthier than other children of his age.”

That is exactly what researchers are trying to establish. They monitor every detail of Stanley’s daily activities.

Child development assessor at the Kikoneni Health Centre, Khassim Mashobo, told euronews: “I follow him for about an hour. I note who he communicates with, how much he speaks and how he vocalises. I also look at his mobility, if he is sitting, or standing, or running, or playing – whether he is alone or with somebody else. And I watch his emotions, like anger, happiness or sadness, and his behaviour.”

Stanley also goes to a nearby clinic where he undergoes extra examinations.

Another assessor at the health centre, Munaa Lila, explained: “We measure his responses to various stimuli, both sound and vision. We play games with him that he knows. And we track his reactions, his reactivity and his body language.”

Developmental psychologists compare data from children receiving doses of iron and those given a placebo.

They think small doses of iron or zinc can have a major impact on a child’s development.

Developmental psychologist at the International Centre for Behavioural Studies, Penny Holding said: “We are looking at their activity levels, because those are the ones that are actually the most sensitive to iron issues. So how much they are able to interact with their environment. The theoretical construct is that if you engage with your environment more, you learn more and you develop more quickly.”

Researchers fear, though, that there is the possibility of having too much of a good thing.

At a clinic at Kisumu in western Kenya hundreds of patients are diagnosed with malaria every year.

Some studies have highlighted a link between iron intake and a vulnerability to malaria, especially among pregnant women and newborn babies.

So the clinic has engaged volunteers in a study to assess whether diets overly rich in iron increase the number of cases.

Volunteer Ruth Aehieng Amisi told us: “When you are pregnant here in Kenya you are often prescribed with iron pills. The scientists explained that if you also add more iron to the food, that could pose a problem. So I volunteered to help them understand.”

Researchers hope to determine how much iron intake is both good and safe for the health of expectant women and their babies.

Scientists give volunteers maize flour that is blended with iron supplements in the clinic’s labs and then track their health record.

Public health nutritionist at Wageningen and Maseno Universities, Martin N. Mwangi explained: “It seems that there is an effect of iron on malaria parasites. But we do not know to what extent, whether (that) is very harmful, or not very harmful. So that is one of our goals here. We want to be able to explain the relationship that exists between iron supplementation and malaria. Does it make malaria worse? Or does it just leave it as it is?”

While waiting for the final conclusions from the research, scientists are convinced that the right doses of micronutrients added to certain staple foods can help fight child malnutrition in Africa.

They say their next big challenge will be how to provide affordable enriched food to a widely rural, low income and often isolated population.

Inge D. Brouwer, the co-ordinator of the INSTAPA project at Wageningen University told us: “We are trying to convince the food industry also to go for what we call economy of scale. That means that they can reduce the profit they can make on a food product while at the same time opening up new big markets of people with lower purchase power who can buy those products. So at the end of the day the (food industry’s) total profits would be more or less the same.”

It is a solution, researchers hope, that could help to fight child malnutrition in Africa.