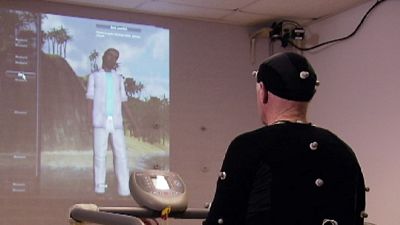 “Every day I said to myself: ‘Tomorrow I’ll start to eat properly, tomorrow I will take care of myself’ but the next day I did nothing. And this has been going on for months and years. It’s had serious consequences for my body: problems in the stomach, changes in my blood; I have been in very bad shape.”

“I’m a bus driver. And now I have serious difficulties moving the steering wheel while driving. It all started with pain along the neck and moving down to my shoulders. My neck pain has been going on for three years now.”

“It took me nine years to realise that the problem was growing and growing. I just could not see any solution. And this had disastrous consequences. Family problems, for instance. I told many lies, my girlfriend was losing trust in me. I become very withdrawn. In my world there was only me and my problem.”

Binge eating, chronic pain, and addiction. Three very different medical conditions, all hard to treat. Could the virtual exploration of an island be part of the solution for these three patients?

Some European scientists are convinced it is. So this is the story of how research has managed to develop a serious videogame, for a serious purpose.

“When I see a plate of fruit, I don’t touch it: there is something in my brain that says that this is forbidden for me, because it is healthy food. It is like I don’t need healthy food. Instead, I devour all kind of unhealthy things. Because I don’t know how to feed, I just eat.”

Under study in Barcelona is the complex disease, Binge Eating Disorder, which leads to a total loss of control when eating.

Patients are testing a videogame specially developed to help them to recognise their emotions and to regain self-control.

Fernando Fernández-Aranda is a researcher in Eating Disorders at Bellvitge University Hospital.

He said: “The videogame is proving useful as a complimentary tool for some patients to control certain aspects of their personality, like impulsivity or tolerance to frustration.

“For instance, the videogame can teach my patient to raise her tolerance to frustration, to lose impulsivity and to improve the organisation of her daily tasks so that she can obtain the goals she is looking for. She learns to understand her different states of mind, and she can control her different reactions; she knows what reactions are well adapted – and which are not- to states of mind like sadness or anxiety”.

In the Netherlands, physical ailments are also benefiting form this novel approach. Some patients at the rehabilitation centre in Roessingh suffer from chronic back and neck pain. The same videogame helps them to relax their muscles, raise their exercise performance and maintain discipline in their training.

Human Movement scientist, Stephanie Jansen-Kosterink demonstrated on a patient, explaining: “These electrodes are going to measure his muscle tension, so he can try to reduce that muscle tension. With the system we can see exactly where the patient is in space, how fast he is moving, how far his head is moving. It reveals his range of movements, but also how tense his muscles are. So there are all kinds of data that we can get out of the game and use in our research, or in the treatment of patients”.

The videogame has been developed under a European Research project called Playmancer.

Game developers, psychologists and therapists worked together on tailoring the right scenarios for both pain rehabilitation and mental health treatments.

Elias Kalapanidas, the Coordinator for the PlayMancer project, said: “This game goes beyond virtual reality. Virtual reality reproduces the surrounding environment, but it offers no rewards system. Our aim was to motivate patients to know their body and mind better. Videogames are entertaining and motivating, so we thought they can provide effective complimentary therapies in different diseases.This videogame is like a bonding factor between patients and their therapists and doctors.”

The search for videogame treatments to some psychological disorders proved to be specially challenging.

“At first I found it bizarre that my addiction to gambling could be treated with a videogame. But after some sessions I understood the point. The videogame helps me to know my state of mind at any given moment. For instance, it can help me to realise I’m becoming too nervous. So I can work on my own emotions to try to calm myself down”.

Indeed, the videogame identifies boredom, excitement or anxiety in patients – and their cognitive responses – with the help of emotion recognition technologies and biosensors.

Avoiding undesirable secondary effects, like eventual addiction to playing, was a main priority.

“Technical developers first proposed a number of ideas. But we, psychologists, thought they were in fact too motivating and could be counter-productive to our patients. For instance, developers proposed a version where patients could play online with other people from different countries. We know from scientific literature that these online videogames are highly addictive to certain vulnerable users. So we asked developers to just provide a simple videogame that a patient can play alone and without score patterns,” says Susana Jiménez-Murcia.

Patients are always supposed to play the videogame under medical supervision.

And this, scientists say, is a huge difference compared to existing commercial videogames that already recognise users’ movements.

“When you play a commercial game, there are, for instance, moves that you can fake. Because you are just using a console. But here you can’t fake the walking, you have to really walk. There is another difference: all the measurements are in the game, and we get them out. So we can see if the patient’s walking pattern is normal, or how much muscle tension he has. With existing commercial games there is only input. Here we also have output,” explains Stephanie Jansen-Kosterink

So how long will it be before you can get a videogame prescription for certain mental disorders or physical rehabilitation? The research proves therapeutical videogames can be useful for certain patients. Now scientists say it is up to policymakers to play the game.

She said: “There is no problem with acceptability by patients and therapists. There is also no problem with existing technology. But it is really an organisational change. So the only short-term problem is the financial aspect, at least here in the Netherlands; how our Social Security system is going to reimburse this kind of treatment: that could maybe take a long time”.

In the meantime researchers are already searching for new therapeutical applications of this – and other – serious games.