We’re in Germany’s rust belt (the Ruhrgebiet) where the now-closed coal mines and steel works forged the region’s image as the country’s industrial heartland.

Today the area struggles with high unemployment, poverty and a huge migrant population.

It is home to a lot of Kurdish refugees from northern Syria, among them a family I met in 2015… in eastern Romania.

“Two years ago, a small wooden boat crossed the Black Sea. On board were 70 Syrian refugees, heading from Turkey to Romania.

“I first met Kawa, his wife Emina, and their baby daughter in a Romanian refugee camp.

“I’m going to see how their lives have changed. We’re going to meet up after two years. This time, in the German city of Gladbeck.”

But before seeing them again, let’s look back…

When Euronews first heard about an overloaded refugee boat on the Black Sea, we sent a team to find out if was set to become another migrant route.

Kawa and Emina fled their home-town of Kobane in 2014, when ISIL captured hundreds of Kurdish villages in northern Syria.

After finding temporary shelter on the Turkish side of the border, Emina gave birth to a girl: Huner. The couple decided to search for a different future – in Europe.

“I have seen war and killed mans (killed men) and people dying in front of my eyes,” Kawa Eli told Euronews. “I see them cut… their leg cut… this man you know him very well and he is dying… It is not easy to see your home is destroyed… just in moments… go in the air…”

Two years ago Kawa challenged me to a game of chess in the Romanian refugee camp. He was the better player… To give this Euronews reporter a second chance, we agreed to meet again for a re-match. 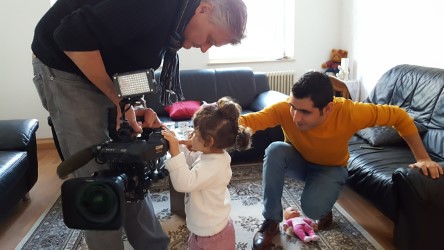 One of those cold winter days in northern Germany. Kawa gives us a warm reception.

While preparing dinner, Emina tells us she is expecting a second child: another daughter.

Romanian authorities accused Kawa of people smuggling because he took his wife and newborn with him, crossing borders without permission.

While Kawa spent six months in Romanian custody, a truck driver took Emina and baby Huner through Hungary and Austria to Germany. Waiting in his prison cell for the trial, Kawa played chess… One day, an interpreter brought him news:

“He told me: your wife (is) in Germany and they are safe and do not worry!,” said Kawa. “And I forget my jail, my prison, really… (SMILES) I was very happy… that they are in Germany now…”

Finally the court in Romania ruled that Kawa was not a human trafficker. But for having entered the country without documentation, he had to pay the equivalent of about 1,300 euros.

After his release, Kawa travelled to Germany to join his family. When they were reunited, his daughter was older and had started to walk. Would little Huner recognize her dad, after the long separation?

“She was looking to me and (she said): Oh! She asked: Papa?… – And I said: Papa!… But she stayed about two or three minutes (without moving) and (then) she became to laughing at me… and to play with me and to play with my hair… the moment I remember until now: when she (was) told: come to papa! and she (was) running to me (SMILING). It was an incredible moment, really, it was,” added Kawa.

Family reunification is one of the basics of European refugee protection procedures. – Emina tears up as she recalls this moment of pure happiness…

“It was a great feeling when I heard my husband had been released from the Romanian prison.. and the second great feeling was seeing him with my own eyes at the German train station,” she said. “First of all I didn’t believe that he would actually get to Germany… It was so great to have each other again… to be reunited… When the train arrived, what I saw first, was not Kawa – but a familiar piece of luggage… So I saw this luggage, and I was overwhelmed with emotion: it is real: Kawa is back. He is really here. I realised this as soon as I saw his luggage and I started to run… and then he appeared for real: Kawa! And I held him tight…”

First, the family was placed in the east of Germany. But some of their relatives has taken refuge in the west of Germany, so Emina and Huner also headed west.

“Here in Gladbeck we noticed, especially in the spring of 2016, that recognised refugees moved in huge numbers from the eastern parts of our federal republic towards the Ruhr region, to Gladbeck. They did not really feel safe in the east.. Nevertheless, regarding the jobless rate, eastern Germany is better off than the Ruhr region.”

To help the family integration into German society, Kawa looked at daycare facilities, including a Christian kindergarten, run by a local church. Huner wants to play with other children but for now, there are no free place for her.

Gladbeck has 150 refugee preschoolers. Despite the city’s budget issues, Gladbeck has prioritised the construction of new daycare facilities.

“I am sure she will connect with people (other children) very easy,” said Kawa “We went to kindergarten. But kindergarten did not accept Huner yet – because Huner is two years old and they did not accept under four years old… – We prefer that Huner will take (learn) German language from kindergarten and school and I will speak with her Kurdish language.”

So far, the family has not made any German friends. Most social contacts are within the Kurdish community. Huge numbers of refugees from Kawa’s Syrian hometown Kobane live in the region.

Off-camera, some German officials talk about “a lost generation”: refugees that will find a job in five or ten years time at its best.

Hans von der Brelie, Euronews:
“Language acquisition is most important. A specific question on that: are there sufficient language course offered? Or are there long waiting lists?”

Rainer Weichelt, Deputy Mayor, Gladbeck:
“Waiting times are long. There was no other way to handle it. Between summer 2015 and this summer we had a difficult situation: When lot of people, be it 1.2 million or one million, come to a country, you can not boot up all systems just by pushing a magic button… First we had to develop the (administrative) structures step by step.”

During the industrial revolution, Gladbeck became a city when tens of thousands of migrants moved here from Polany. Today it’s growing again – thanks to Kawa and other refugees.

“In this moment I am just thinking about taking German lessons and car (driving) lessons,” Kawa said. “For five years later, I am thinking just about it will be a good idea to have a music instrument and to care about music… (I will not move to another place in the world.) – I will stay here in Germany if they will allow me to stay here.”

Emina and little Huner got residence permits for three years. When Kawa arrived (just a few months later), the law had changed, so he got just a permit for one year. But they hope to get permanent residence permits later. Their dream has a name: a future in Germany…

We agree to meet again in a few years to see how they’re getting on. And for another game of chess.