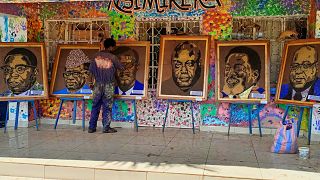 Patrick Cikuru Cirimwami with a collection of his portraits of D.R.C. politicians.   -   Copyright  CRISPIN KYALANGALILWA/REUTERS
By Hannah Brown  with Reuters  •  Updated: 16/01/2023

Artist Patrick Cikuru Cirimwami from the Democratic Republic of Congo has created a collection of portraits of his country’s present and historical leaders.

But instead of pencil or paint, Patrick melts down plastic waste that he collects in his local area to create these masterpieces.

Making a plastic portrait from mountains of bottles

In his hometown of Bukavu, eastern Democratic Republic of Congo (DRC), there is no public waste collection. Rubbish often ends up in nearby Lake Kivu, causing breakdowns at its hydroelectric plant which lead to power cuts.

Patrick regularly wades through knee-deep mountains of plastic bottles by the lake, collecting as many as he can carry for his artworks. He melts the plastic down to make a thick liquid which he uses to paint the portraits.

Politics and the environment in DRC

Last month, the artist's portraits of political figures - from independence leader Patrice Lumumba to current president Felix Tshisekedi - were displayed at a cultural centre in his hometown.

"There were many conferences in DR Congo, many meetings [...] but in these meetings there was no mention of problems related to the destruction of the environment. No measures have been taken to protect nature.

“The past presidents, the fighters such as Kasavubu, Lumumba, Mobutu, Laurent Désiré Kabila and Joseph Kabila, even Felix Antoine Tshisekedi Tshilombo, have all done nothing. They are responsible for the destruction of the environment," explains Patrick.

They are responsible for the destruction of the environment

Democratic Republic of Congo, like other African nations, has insisted on its right to develop its economy by exploiting the country’s vast natural resources. It has come under criticism for putting the rights to drill for oil and gas up for auction in the world's second-biggest rainforest.

It also hosted talks before November's COP27 climate summit to call on rich nations to honour a pledge to developing nations which would ensure fair finance to fight climate change.

Watch the video above to see Patrick create his incredible artwork.