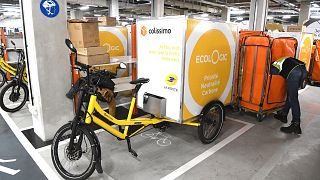 The French Post Office is using pedal power to try and reduce its carbon emissions by 30 per cent before 2025.

Cargo bikes are just one innovative way La Poste is hoping to reach 100 per cent carbon-free deliveries in 22 French cities by this date.

By saddling up, postal workers are making sure packages and letters get where they need to go while cutting emissions.

“The aim for the Post Office group, in general, is to reach a 30 per cent reduction in CO2 emissions by 2025,” says Younes Lfara, La Poste's director of urban logistics for the Ile-de-France region.

“So, with this objective in mind, we have planned for the acquisition of electric vehicles and cargo bikes.”

The Ile-de-France region already has 96 cargo bikes but it is aiming for 150. Across France, an estimated 1,000 of these cycles are needed to meet emissions reduction goals.

Riding them isn’t always easy. Nicolas Hildevert, a 27 year old postman from Paris, says that when you go from a car to a cargo bike “it's quite complicated”.

“It’s easier when it’s full,” he explains, because the bike is stable. “But when it’s empty, the cargo, it’s capable of making us pitch a little.”

Hildevert says it can be dangerous if you don’t know what you are doing, though postal workers like himself have received training to ensure it is as safe as possible.

Can cargo bikes be used for long distance deliveries?

Not all post can be delivered using cargo bikes, however. It works for close deliveries within cities like Paris but isn’t an appropriate method of transport if items need to be sent further afield.

“We deliver to cities where it is not next to our warehouse, so it is a little more complex. Sometimes you have to take the motorway…to deliver to certain cities,” says Hildevert.

But the French Post Office is hoping that this is where its increasing fleet of electric vehicles can step in. 100 per cent of the vehicles at the Louvre warehouse in the centre of Paris are already electric.

Watch the video above to see Paris’s pedal-powered posties in action.