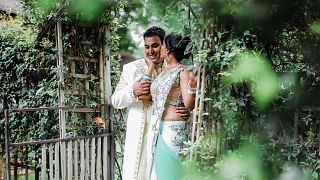 It’s hard to imagine an Indian wedding without the swish of silk sarees and the clink of gold jewellery. The ceremonies are known all over the world for their pomp and grandiosity and are typically referred to as big, fat Indian weddings.

After meeting a young woman who received an invite to a so-called ‘eco-friendly wedding’, I set out to look into the environmentally conscious generation in India and find out why trends were changing. I came across one group of couples rejecting the ostentatious approach to tying the knot, in favour of a zero-waste alternative. For them, the idea is to follow certain customs and rituals to appease the family, but try and convince them to adopt sustainable practices in their own lives at the same time.

The first couple I met were Monica Pandian and Praveen Raj, who got married on World Environment Day in June 2016. Monica proudly states that she is sure hers was the first green wedding ever conducted in the southern city of Chennai. As a climate-conscious couple, they resolved to send e-invites to friends and colleagues and hand-made paper invites to give to relatives.

Around the same time, Veena Balakrishnan married Vignesh Vancheeshwar, and went a step even further. Along with the invite, Veena wrote a casual note explaining what the concept of a zero-waste wedding meant, both to educate her guests and let them know this would not be a flamboyant affair. But what else makes an Indian wedding eco-friendly?

Seeds for jewels and cotton for silk

I speak to yet another couple involved in the movement, Prashin Jagger and Deepa Kamath. They found themselves in difficulty when their families insisted on “new clothes for a new beginning," so they chose to wear cotton, a natural material. Monica and Praveen also opted for handloom clothes made from organic, naturally dyed cotton.

“Fashion is so unsustainable. More so, when the couple, especially the bride, can’t wear the same dress again,” Veena explains. Rather than buy something new, she chose to wear a silk saree that her grandmother wore on her wedding around 50 years ago, as a sentimental gesture to the family.

Gold ornaments are also a must at Indian weddings - every family is expected to buy several new ornaments for the ceremony. What started as an assurance of financial security years ago when women were not educated, has now become more of a status symbol. As a form of opposition against the tradition, Prashin proposed to Deepa with a wooden ring with their initials inscribed on it. Deepa liked it so much, that she got a similar one made for Prashin.

Monica wore jewels made of seeds and garlands made of cardamom and almonds on a cotton base. For her thaali, a traditional necklace that the groom ties around the bride's neck to sanctify the marriage, Monica decided to upcycle an old ornament as she was mindful of the environment and mining. Veena, too, wore existing family jewels.

Decorations and food are known to leave the most amount of waste at weddings. Meticulous planning, however, meant these couples were able to minimise what was left over. Instead of draping the room with bunting or plastic confetti, Veena went down a more natural route.

“The venue in itself was beautiful and so there was no need for elaborate decoration. Instead of exotic flowers, we chose locally sourced marigold and jasmine,” says Veena.

As a wedding photographer, Prashin observes food being wasted regularly. To avoid this himself, he and Deepa avoided serving an elaborate menu. They chose reusable melamine-ware that the caterer already had in stock. Similarly, at Veena’s wedding, food was served the traditional way, on a banana leaf, and Monica and Praveen opted for vegan food.

Be it sourcing groceries in bulk to avoid plastic wrapper waste, serving water in stainless steel glasses, bowls made of areca tree leaves, distributing leftover food or turning kitchen waste into fertiliser tonic, it’s all proof that Indian weddings can in fact be zero-waste.

Given the humidity and high temperatures almost all through the year, even small wedding halls in Chennai are air-conditioned. To avoid this, Monica’s open wedding was held in a beach resort, so there was no need for air-conditioning or focus lamps. Veena also went for natural lighting and ventilation, by having her wedding in the courtyard of a beach house. Each ceremony was intimate, with the number of guests limited to about 150 (which is not many for an Indian wedding!).

Since the ceremonies took place, the couples have received tremendous feedback. Veena has since decided to video other people’s weddings so that she can consult and help others have green weddings in future. The movement has also given way to eco-friendly wedding planners, who offer help to couples who wouldn’t know where to start.

Living a sustainable lifestyle is important day to day, says Monica, but one green wedding makes so much more of an impact. “It’s fine to plant trees and grow gardens on the terrace. But the entire effort could be negated with a single wedding.”

From big, fat Indian traditions to a completely new approach, these couples are delighted to have left a minimal carbon footprint and hope to spread their message far and wide in the community.

In Kashmir, wedding season is on, but with new security measures