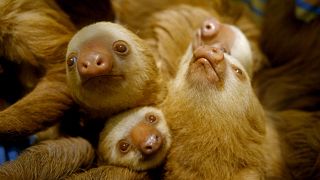 Only 1,500 sloths are still left in the wild, making them one of the most endangered mammals on the planet according to WWF.

Life for these slow-moving creatures can be troublesome, with deforestation, hunting and the destruction of their natural habitat prime reasons for their decline.

But for many of Costa Rica’s sloth population, the issues begin at an early age. Orphaned cubs are a frequent discovery in the rainforest, where many of their mothers succumb to electrocution, road traffic collisions and the teeth of wild dogs.

“It’s a constant battle,” admits Encar García, the founder of the Jaguar Rescue Center (JRC) in the Central American nation.

Located deep within La Ceiba rainforest, this rehabilitation facility offers sloth babies a chance to develop the skills necessary for a life in the wild.

“How do you teach a sloth to be a sloth? That’s the real question,” continues García, “and that's why we invented a way these baby orphans can be released back into the forest where they belong.”

From kindergarten to graduation

Once an orphaned sloth is brought to the facility, the JRC acts quickly to introduce the animal to its new environment.

“Firstly, we put it with other babies of the same age and we take it through a process that we call ‘high school’, where it goes outside, starts climbing trees and uses our playground.

“Little by little, it learns to be a sloth.”

This process is matched with expert medical care and nutrition - ranging from leaves and twigs, to fresh fruit and vegetables.

A low metabolic rate means sloths can survive on relatively little food. It takes days for them to process what other animals can digest in a matter of hours.

But without guidance from their mothers, the staff at the JRC work hard to encourage cubs to eat a nutrient-rich diet.

“Learning to find their own food is one of the final stages of their education,” adds García.

“At this point we leave them on their own the whole time, and they do not have any kind of care. They have to find food by themselves.”

This process allows the sloths to reacclimatise to their natural environment. Far removed from the helping hands of their human carers, the cubs spend their days climbing trees and eating leaves from overhanging branches. Only camera traps are present to document their movements.

“After this last process, we can see that they are wild and ready to graduate,” says García.

It’s a great feeling to see that all of our work has resulted in freedom for these wonderful animals.

“When you approach them, their behaviour is totally different. They are no longer a kid, but a large animal weighing three kilos.”

Before they are released back into the wild, the sloths are microchipped so that they can be tracked on their journey. Their nails are also painted in bright colours, allowing for quick identification in the wild.

“Once they are released, we go to the Cahuita National Park and follow them,” says García.

“It’s a great feeling to see that all of the work that has been done by our entire team over three years has resulted in freedom for these wonderful animals.”

Watch the video above to find out more about the baby sloth rehabilitation centre.