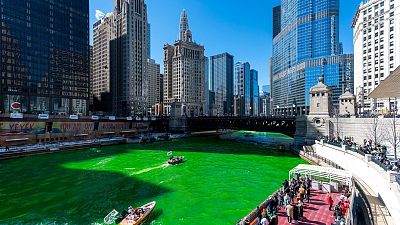 The Chicago River is once again a Flubber-coloured shade of green in celebration of St Patrick’s Day.

Every Saturday before the Irish day of revelry on 17 March - except for the last two years of the pandemic - the river is dyed this striking hue in honour of the city’s Irish roots.

But seventy years on from the tradition being started by Chicago’s plumbers, environmental groups are increasingly keen to see the river left alone.

“Dyeing the river perpetuates the notion that it can be treated any way anyone wants, rather than protected as a valuable natural resource,” says Margaret Frisbie, executive director of Friends of the Chicago River, which has long campaigned for an end to the practice.

“Now more than ever our land and waterways need protection and our traditions need to evolve to reflect that.”

So how exactly did the eye-catching celebration evolve, and - as onlookers wonder year after year - is there an environmental cost?

Why does Chicago dye its river green?

Dyeing the Chicago River green is inextricably bound up with pollution.

When Richard J Daley became Mayor of Chicago in 1955, he was determined to clean up the city’s riverfront area - starting with the sewage-strewn river itself.

To work out where the waste was coming from, he employed local plumbers to pour an orange concoction into people’s water systems. When the solution came into contact with sewage, it turned a bright green.

Seeing a colleague’s green-soaked overalls one day reportedly gave Stephen Bailey, a representative of the Chicago Journeymen Plumbers Local union, the idea to scale up the discolouration.

As co-chair of the parade (an annual occurrence in Chicago since the 1950s) he first turned part of the river green in 1962. 100 pounds of the chemical was poured in, leaving it a neon shade for the entire week. It took a couple of years to perfect the ratio so it would only last for a day.

Is it harmful to river wildlife?

The original dye was an oil-based fluorescein, also commonly used to detect leaks. Environmentalists successfully argued that it was ecotoxic and could be doing even more damage to the river, resulting in a switch to a powdered, vegetable-based dye from 1966.

“Illinois EPA has never required a National Pollutant Discharge Elimination System (NPDES) permit so there is no way to know what the dye is or whether it is harmless,” says Ms Frisbie.

But the Friends’ main objection is on grounds of disrespect to the river and its inhabitants. The water has come a long way since the badly polluted sixties, they say. “Imagine fish, beavers or otters swimming through that dyed-green water and you might think a new celebration is the right idea.”

There’s still considerable room for progress, however. In a video shared to Twitter, Chicago historian Shermann Dilla Thomas says, “If you know anything about the Chicago River, you know that river is polluted.”

Conservation police are also keeping an eye out for illegal dyeing, which occurred in 2020 and 2021 while the parade was called off due to Covid crowd control.

Only a stretch of the river downtown is allowed to be dyed, but last year an upper part of the water was also turned emerald green. Whoever the culprits are, “their idea of fun is ecologically harmful and against the law,” says Frisbie.