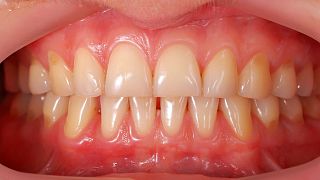 A 300 million-year-old fossil found in the US is shedding new light on how climate change shaped the way our teeth look today.

“The teeth show clear differentiation in shape between the front and back of the jaw, organised into distinct regions,” says Dr Suresh Singh from Bristol’s School of Earth Sciences.

“This is the basic precursor of what mammals have today - incisors and canines up front, with molars in the back.”

The reptilian creature, officially known as Shashajaia bermani, had large canine-like teeth that were different to other similar animals found in the Late Carboniferous period. During this time, giant insects roamed the land and swampy rainforests covered much of the planet.

Dr Singh says that it is the oldest record of teeth like this that has been found in our evolutionary history.

When comparing the fossilised jaw of Shashajaia with other similar ancient creatures, the scientists found that their teeth began to change 300 million years ago. Around this time abundant wetlands were being replaced by more arid seasonal environments due to global climate change.

The food that was available changed, becoming more diverse, so the new fossil suggests these teeth were an evolutionary adaptation to help long-extinct reptiles catch prey.

What can fossils tell us about climate change?

This ancient fossil was found in an area known as the Valley of the Gods in Utah, US - a region that is hugely important for palaeontologists.

The record of ancient creatures was originally discovered in 1989 by Dr David Berman whose decades of work led to the area being declared a National Monument in 2016.

One of the many ways that scientists predict how rising carbon dioxide levels could alter the planet in the future is to see how it responded in the distant past.

“Understanding changes in its fossil assemblages through time will shed light on how climate change can drastically alter ecosystems in deep time, as well as in the present,” says lead author Dr Adam Huttenlocker from the University of Southern California.