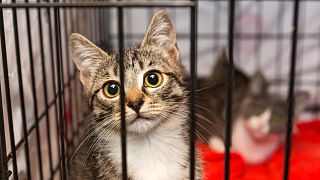 Cats are beloved pets for many people - but in Western Australia, their natural hunting instincts are turning them into deadly predators.

Veterinarian Dr Maren Beeston sees the damage they do all too often.

Tending to an injured owl - the latest victim of a vicious cat attack - she expresses doubt over the likelihood of the animal surviving.

"Unfortunately for this boobook (a type of owl), the fracture looks like it involves the joint, so the likelihood of recovery is probably not very good," says Dr Beeston.

"The power of the cat's jaw may have caused that fracture and it's definitely caused all of this infection, inflammation and swelling."

Hundreds of victims of cat attacks are brought to Western Australia Wildlife every year - with only half of them surviving.

Domestic felines do away with an estimated 230 million native Australian birds, reptiles and mammals annually.

In Australia as a whole, domestic felines do away with an estimated 230 million native Australian birds, reptiles and mammals annually.

"Cats are evolving, learning about the different wildlife and they're getting better at hunting these animals," says Dean Huxley, manager of the rehabilitation clinic.

In response to the plight of the nation’s wildlife, a Western Australian city councillor is now leading the push for stronger laws on cat ownership.

Cats are already banned from bushland in the City of Fremantle, WA, but Adin Lang wants to take this one step further.

"The plan is now just to prohibit cats from all Fremantle city property, that would be all roads and all footpaths," says the councillor.

The only exception is if the cat is on a lead - an irregular but increasingly popular method of exercise for some cat owners in the city.

"Surprisingly, I've got a handful of friends that walk their cats regularly on leads," says Lang.

The proposal is part of a national movement by councils encouraging citizens to build enclosures for their pets - with some owners subject to fines if their cat is found outside their property.

"I think like dogs, cats will soon be inside,” says Lang.

“Our future generations will look back and say to us, ‘you guys let cats roam around Australia eating all our wildlife for all these years?’"

Watch the video above to find out more about Australia’s deadly predator.