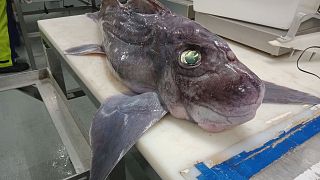 Scientists have discovered a rare newborn ghost shark off the coast of South Island, New Zealand.

But don’t let the spooky name fool you, because this bottom-trawling fish isn’t as fearsome as some of its sharp-toothed relatives.

The baby shark was found at a depth of 1,200 metres by scientists from the National Institute of Water and Atmospheric Research. The newly hatched deepwater species is actually a chimaera meaning that, while it’s closely related to sharks and rays, its evolution diverged from them genetically around 400 million years ago.

What are ghost sharks?

Also known as a rat fish, spook fish or rabbit fish, because of their large teeth and eyes, these cartilaginous fish can grow to between 60cm to 2 metres long.

There are around 50 known chimaera species worldwide. Most are not well-studied as they live at a depth of 500 metres or more, making them difficult to observe in their natural habitat.

Spending their lives on the ocean floor, ghost sharks are bottom-feeders that feast on marine worms, sea-urchins, crabs and molluscs. Like their shark cousins, they use electroreception - which helps them to sense the electrical currents of other organisms - to seek out their prey in the dark, as there is virtually no natural light at this depth.

How do ghost sharks mate?

Similar to others in the shark family, male ghost sharks have a retractable sex hook on their heads. This sex organ is used to hold the female in place during copulation, while another two clasper organs in the pelvic region inseminate her.

The female ghost shark has two uteruses, which enables it to lay more than one egg on the ocean floor. Ghost shark embryos develop inside these egg capsules and feed off the egg yolk until they are ready to hatch.

“You can tell this ghost shark recently hatched because it has a full belly of egg yolk,” says NIWA Fisheries Scientist Dr Brit Finucci, who was part of the team who made the discovery.

“It’s quite astonishing. Most deep-water ghost sharks are known adult specimens; neonates are infrequently reported so we know very little about them.”

Although further tests are needed to determine the exact species of this ghost shark, Dr Finucci believes the rare and exciting find will give scientists new insight into the lives of these deep-dwelling fish.

“From better studied chimaera species, we know that juveniles and adults can have different dietary and habitat requirements. Juveniles also look dissimilar to adults, having distinctive colour patterns.

“Finding this ghost shark will help us better understand the biology and ecology of this mysterious group of deep-water fish.”