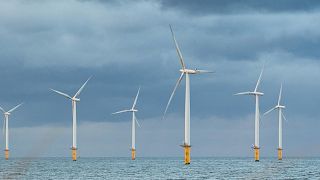 At 20 times the size of the world’s current largest floating wind farm, a new renewable energy project is being built off the coast of England and Wales.

Called “Gwynt Glas” or “blue wind” in Welsh, it will provide power for around 927,400 homes. While an exact site has not yet been confirmed, a 1,500 square kilometre patch of the Celtic Sea 70km off the coast is being assessed for its suitability.

“This is a great start to 2022 for us and we are very pleased to announce this partnership with DP Energy.

“We firmly believe Gwynt Glas will be a catalyst for further supply chain growth across the UK which is something we as a company are very supportive of.”

What is a floating wind farm?

Floating wind farms are an “exciting new technology” with the potential to bring investment and jobs for coastal communities, says Sutherland.

Instead of being rooted to the seabed, floating turbines sit on platforms anchored under the water. Constructed on land, they are pulled out to sea by boats and tethered using mooring cables. While conventional turbines are limited to a depth of 50m, floating turbines can be installed in a wider variety of locations.

It means they can better accommodate fishing and shipping lanes as well as allowing them to reach stronger winds. Around 80 per cent of potential offshore wind power is estimated to be found in deeper waters.

It also means that they cannot be seen from the shore. A 182cm tall person can see roughly 5km out to sea so the turbines of this new wind farm off the UK coast will not be visible from land.

Initial remote surveys for marine mammals and birds have been taking place since Spring 2021 to try and reduce the impact of constructing the new project on local wildlife.