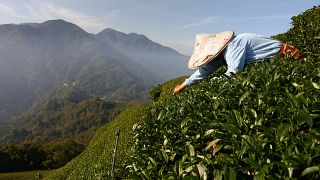 Extreme weather experienced in Taiwan over the last two years is forcing tea farmers to find creative ways to keep their crops alive.

After surviving a once-in-a-century drought, tea plantations in the mountains of Taiwan have been hit by torrential rain in recent months, causing a chain reaction that is proving difficult to recover from.

Hacking into the undergrowth to find water for their crops, farmers say that this year’s harvest is down about 50 per cent on last year.

After surviving a once-in-a-century drought, tea plantations in the mountains of Taiwan have been hit by torrential rain in recent months

Another unexpected side-effect of this extreme weather is a dramatic increase in pests on plantations. As summers are growing longer there is less moisture in the air, which is allowing certain pests to thrive, adding an extra challenge for local farmers.

The tea plantations in the mountains around Meishan are key to the local economy, employing locals who are paid based on the weight they are able to collect in a day.

The drop in crops has a direct impact on these local workers, and some are getting creative in response, strapping razor blades to their fingers to collect tea as quickly as possible

In June this year, Taiwan - which typically experiences its wet season between June and September - introduced water restrictions. This followed concerns over historically low rainfall during the previous year, which led to an unprecedented drought.

However, since September of this year, the island has been battered by torrential rain and typhoons sparking fears of landslides after such a long period of drought.

Unfortunately, the delayed wet season seems to have been too little, too late for the tea farmers of Taiwan for this year’s harvest.

Although Taiwan produces much less tea than large producers like China and India, the Oolong variety that is grown in the mountains around Meishan is revered and sought after around the globe.

Tea has been grown in these mountains since the island was part of China's Qing dynasty in the 19th century, the industry then matured and expanded under Japanese imperial rule from 1895-1945.