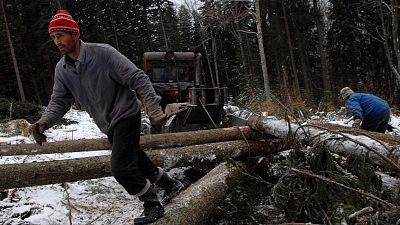 Romanian woodcutters at work. The country's huge primeval forests have been dubbed "the lungs of Europe", but are targeted by illegal loggers.   -   Copyright  AP Photo/Bela Szandelszky
By Lottie Limb  •  Updated: 15/10/2021

Environmental defenders in Europe are at mounting risk of losing their lives, NGOs are warning.

20 years on from a major UN pact meant to protect European activists from persecution, environmental groups say not enough is being done to safeguard those exercising their rights.

Countries which signed the Aarhus Convention in October 2001 are meeting in Geneva next week to discuss how to crack down on cases of violence and intimidation.

Last year saw 227 environmental and land defenders killed worldwide - the highest number on record for the second year running, according to Global Witness.

On the frontline of global warming, activists in the Global South are suffering the most deadly consequences as the climate crisis intensifies.

But Europeans are also dying for environmental causes. Two Romanian forest rangers were killed in 2019 while confronting illegal loggers in the country.

But Europeans are also dying for environmental causes. Two Romanian forest rangers were killed in 2019 while confronting illegal loggers in the country, home to over half of Europe’s remaining old-growth and primeval forests.

One state forestry employee, 50-year-old Răducu Gorcioaia was found in his car near the trees, having suffered fatal axe wounds to his head.

These are only the most horrifying incidents in a slew of assaults and threats levelled against environmental defenders in recent years. Despite the United Nations Economic Commission for Europe (UNECE) agreement, signed by 46 European and Central Asian countries as well as the EU, Europe is not an entirely safe place to stand up for the environment.

Highlighting the misuse of COVID-19 restrictions

Lockdown measures introduced to curb the spread of COVID-19 last year have been misused by some governments and private companies to restrict human rights, environmental NGOs claim.

A new study spotlights 15 cases where environmental rights have been violated during the pandemic, including “rampant” deforestation in Moldova.

A new study spotlights 15 cases where environmental rights have been violated during the pandemic, including “rampant” deforestation in Moldova, and the illegal construction of a hydropower plant in Bosnia and Herzegovina by a private firm.

Martin Skalsky, chairman of the Czech-based NGO Arnika says “at the time of [the Aarhus Convention’s] signing, many hoped that the safe space would expand and the right to live in a healthy environment would deepen over time.

“Unfortunately, today we don’t live in a more open and just world - on the contrary, the area of freedom is shrinking in many countries.”

Can strengthening the Aarhus Convention save lives in Europe?

The part of the Aarhus Convention dealing with protecting nature’s defenders is up for debate next week.

Under the pact, European citizens have three key rights: access to environmental information, the ability to participate in decision-making concerning the environment, and access to justice. Those exercising their rights “shall not be penalised, persecuted or harassed in any way for their involvement,” it says.

To shore up environmental democracy, UNECE member states are set to vote on a new ‘Rapid Response Mechanism’. This could see a new committee member elected and empowered to react swiftly to alleged violations of the article which protects people’s rights.

It’s not exactly clear what form this will take, however, with the appointment of an independent rapporteur on environmental defenders also being mooted, or greater powers being given to an existing committee member.

But the need for a strong-armed response is overwhelmingly clear, explains Sergey Magonov, lawyer for the recently banned Belarusian environmental NGO Ecohome.

In July of this year, 26 environmental NGOs were liquidated in Belarus, their offices sealed and members searched.

During 2020, several of the NGO’s leaders were arrested for “fictional reasons” he says, usually for participating in unauthorised protests, even when the person was in a different town. In July of this year, 26 environmental NGOs were liquidated in Belarus, their offices sealed and members searched.

“Activists are under extreme pressure,” says Magonov. “Seeking justice at courts in the country does not make any sense, but at the same time, launching of existing international mechanisms takes months or years.”

For environmentalists patrolling and preserving Europe’s vital habitats, that’s time they don’t have.