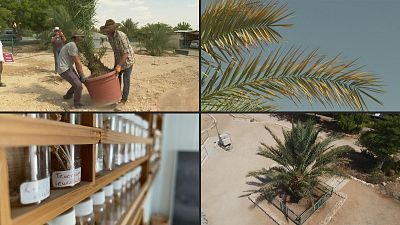 When Sarah Sallon first thought of cultivating 2,000-year-old date palm seeds found in a Roman-era fortress, she received a less than encouraging response.

But Sallon bet that the Dead Sea's unique, bone-dry environment would enable the seeds from the Masada fortress to flourish. And she’s now been proven right.

The seeds – the oldest ever germinated – were among hundreds discovered in an ancient palace built by King Herod the Great in the 1st century BC.

Sarah Sallon at the Louis L Borick Natural Medicine Research Center in Jerusalem previously grew a single date palm tree from one of the seeds. Her team has now managed to grow a further six.

The ancient seeds were prepared by soaking them in water, adding hormones that encourage germination and then planting them in soil in a quarantined area.

The team used radiocarbon dating to reveal the seven seeds were all around 2000 years old. Genetic analysis showed that several of them came from female date palms that were pollinated by male palms from different areas.

This hints that the ancient Judean people who lived in the area at the time used sophisticated plant breeding techniques.

Sallon and her colleagues found that the seeds of ancient Judean dates are larger than modern varieties, which is often indicative of bigger fruit. They now hope to recreate the ancient fruit by pollinating females with males.

“For me it’s a beacon, it’s a symbol of hope,” she says, adding that the trees have now produced over 800 “delicious” dates each.