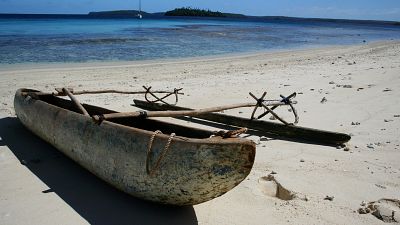 Set in the south Pacific Ocean, Eua island looks like a picture-perfect destination.

But all is not peaceful on the tiny island, which is part of the archipelago of 172 coral and volcanic islands which make up Tonga.

Not only is it crippled by unemployment, but the vital resources and ecosystems which Eua depends on are under increasing pressure due to climate change.

However, the simple act of carving wood may be an answer to the problem.

Locals on the island are learning to carve out canoes and the benefits are manifold.

It helps the environment, provides employment to young islanders, and gives them a cost effective way of catching fish.

"People have to pay to go out to sea on motorboats. But with the canoe, a good breakfast gives you enough energy to paddle through the day," he says.

Fishing is a vital source of revenue on Eua, but its coral reefs have suffered widespread damage due to a rise in ocean temperatures, salinity levels and an increase in the number of fishing boats.

Canoes cause much less damage to the reefs, and are helping to increase marine biodiversity.

The canoe building programme is run by the MORDI Tonga Trust and is funded by IFAD and the Tongan Government.

For unemployed young people like Okusi Lama, they have given him much needed new skills.

"I learnt a lot of things during the training. I would like to encourage the youth to attend because this could be a way to make a living for them, not only as fishermen but also as craftsmen," he says.

The canoe-carving lessons are taught by the elders, who can pass down traditional knowledge.

Not only does fishing provide revenue for Tongan communities, but it also has health benefits.

Many Tongan islands are plagued by obesity. With over 90 per cent of the population being classed as overweight, it's one of the fattest nations in the world.

This problem is partly down to islanders relying on cheap imported foods.

The project hopes encouraging more young people to catch fish will not only provide additional income for families, but increase access to healthier foods.