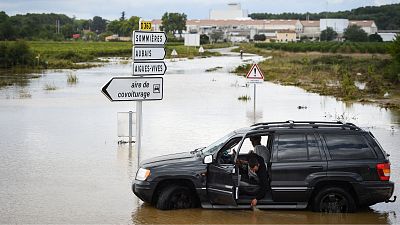 A driver looks at the water flooding a road in Aigues, in the Gard department, in the Occitanie region, southern France, on September 14, 2021 following heavy rains.   -   Copyright  AFP
By Jonny Walfisz  •  Updated: 15/09/2021

Southern France has been hit by a deluge of rain and flash floods.

Areas in the Gard region, near Montpellier were hit by two months’ of rain in the space of two hours.

The torrential downpour led to flooding in multiple cities and towns including Nimes and Calvisson.

Hundreds of firefighters have been deployed with 450 incidents attended to. Gard’s government has said that one person is missing after falling into the Rhôny river in the town of Aimargues.

Helicopters helped in the rescue of around 30 people from a motorway between Langlade and Gallargues le Montueux. Another rescue of 10 people took place in Aigues-Vives.

No casualties have been reported, but authorities have reported significant damage to homes and infrastructure from the floodwaters.

The Gard region has closed its schools and the A9 motorway - the site of the helicopter rescue.

In response to the crisis, the French government has expressed that it wishes to declare a state of emergency.

“I give all my support to the inhabitants who have suffered this bad weather and call on them to be extremely vigilant in the coming days. The State will be reactive with a rapid recognition of the state of natural disaster,” said France’s Interior Minster Gerald Darmanin on a visit to the affected areas.

Earlier this week, floods hit the French-Italian border. In Nice, on the French Riviera, almost a year's worth of rain fell over 12 hours. A number of people have been reported missing in both France and Italy, with several bodies already discovered.