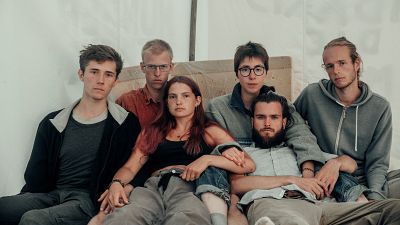 On August 30, a group of seven activists, all aged between 18-27, set up camp outside the German government and began a hunger strike for climate justice.

The organisation goes by the name Der Letzen Generation, meaning, The Last Generation. Its members have committed to sitting outside the Reichstag in Berlin until the government meets their two main demands.

First, its members want to speak with the three forerunners in the German election campaign about what they see as the “murder of the young generation.”

“We value life and don’t want to die,” reads a joint statement from the organisation.

“Profit is being made every minute by selling out our future. This moment is a matter of life and death.”

The Last Generation’s second demand is the implementation of a citizen’s assembly for climate change in the new government, that will discuss immediate measures to combat climate change, including 100 per cent regenerative agriculture.

How is the government reacting?

Green candidate Annalena Baerbock contacted the strikers in early September to speak about their protest. While the Greens have laid out a relatively ambitious climate action plan in comparison to other European nations, the strikers believe its manifesto does not go nearly far enough.

Two weeks into the protest, the three leading election candidates, from the centre-right CDU, left SPD, and centre-left Greens, called the strikers as one.

The candidates attempted to strike a deal with the protestors, promising them a meeting after the election that will take place on September 26.

The appointment was promised on the conditions that an immediate end be put to the strike and that the meeting would be private.

Stating that this offer was the “opposite” of what they demanded, The Last Generation turned down the politicians’ proposal, continuing with their strike.

Hospitalised as a result of the hunger strike

Two hunger strikers have been hospitalised since August 30th.

19-year-old Lina Eichler was one of them, collapsing in the camp on day 20 of the strike. Eichler has since ended her strike, along with two others.

Jacob Heinze, aged 27 has been hospitalised twice since the beginning of his strike. As of Tuesday, September 21, however, Heinze continues to refuse food until the demands of the organisation are met. He is joined by three others that are still on an “indefinite” hunger strike.

The Last Generation committed to the strike because a "hunger strike is one of the last means of peaceful protest you can take," explained Lübbert.

“Because of the urgency of the climate crisis, last measures are appropriate right now."