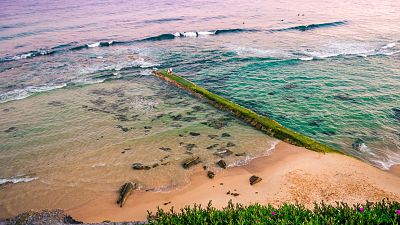 During the summer of 2019-20, fires ravaged Australia’s southern states. They burned land equivalent to two Hungarys, destroying almost 3,000 homes. 34 people died, with hundreds of more deaths believed to be linked to smoke inhalation.

But one positive has emerged from the devastation: A tiny algae plant has flourished, with potentially great benefits for the environment.

The massive algal blooms were discovered in the Southern Ocean by researchers at the University of Tasmania, Duke.

When forests burn, they release tiny particles, called pyrogenic aerosols that are carried by smoke for months on end, often spanning great distances.

When the vast billows of smoke swept across Australia, they contained minuscule aerosol particles of iron. Eventually, the smoke reached the ocean and these iron particles fell into the water.

Iron works as a fertiliser for marine wildlife. So, over time, a microscopic form of algae, phytoplankton, began to blossom at an unprecedented level.

“What made it more extraordinary is that the part of the season when the bloom appeared is usually the seasonal low point in phytoplankton, but the smoke from the Australian bushfires completely reversed that,” said co-author Prof. Peter Stutton.

"Our results provide strong evidence that pyrogenic iron from wildfires can fertilise the oceans, potentially leading to a significant increase in carbon uptake by phytoplankton," said biogeochemistry professor Nicolas Cassar.

What does algae have to do with carbon?

Basically, phytoplankton is the foundation of life in the ocean. Through photosynthesis, the tiny blooms absorb carbon from the atmosphere.

So much of the algae has grown that Professor Cassar even believes that a large portion of the damages from the wildfires may even have been temporarily offset.

But, it’s not yet unclear how much of the carbon has been taken in by the phytoplankton, or when it will be released back into the atmosphere.

For the time being, though, the algae are keeping enormous quantities of carbon in storage, buying some time.

As well as this, the spur in algal growth is a turning point in the Southern Ocean. A previous study by the Helmholtz Centre for Polar and Marine Research concluded that algae growth had substantially slowed due to ocean acidification.

The University of Tasmania’s project was the first of its kind so the long-term connections between fires, algae, and carbon still need to be studied.

This is in part because, up until recently, bushfires of this scale had been the extreme, not the norm. Now, as wildfires become more and more frequent, more of their effects on marine life - both good and bad - will be discovered.

The findings of this report are expected to extend beyond Australia. Co-leader of the study Joan Llort has said that the North Pacific, and seas around the equator “should also be responsive to iron additions from wildfire aerosols”.

More research is needed on whether the phytoplankton will continue to blossom, and what this means for levels of carbon in the atmosphere. Right now, however, in the smoky ash that devastated Australia nearly two years ago, a glint of silver has emerged.