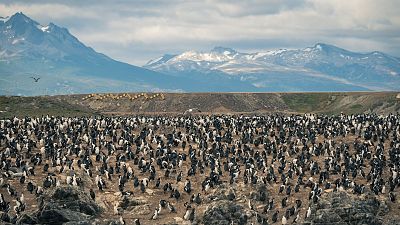 **Sebastián Di Martino is a biologist and the conservation director of Fundación Rewilding Argentina. He has been in charge of coordinating the reintroduction of extirpated species in Iberá since 2016. Here explains why rewilding Argentina is crucial if we want key species to survive.
**

Argentina's nature conservation is undergoing a major revolution. People are witnessing the return of extinct species to their righteous homes - and it’s all as a result of rewilding.

Jaguars, giant otters, red-and-green macaws, and many other species are already thriving, or in the process of doing so, in the locations they used to inhabit. This native wildlife comeback means ecological interactions recover, ecosystems function better and local culture also revives, as much of Argentinian economy is shaped by these iconic species.

This transformation in conservation is led by political figures, local communities, scientists, philanthropists, and one foundation, Rewilding Argentina, honouring the legacy and continuing the work that Doug and Kris Tompkins started over 20 years ago.

The Tompkins’ arrived in Argentina in 1997. A year later, they bought their first cattle ranch in the northeast of the country. That ranch, called San Alonso, lies in a vast wetland whose name was unknown to most people across the country, but which today signifies biodiversity, beauty, and adventure: Iberá.

Doug and Kris brought with them a revolutionary idea, which was already ongoing in Chile - acquiring hundreds of thousands of hectares of private land, eradicating practices that degraded the ecosystems, and donating them to the state to create large national parks. This idea led to the creation of Monte León, Iberá, Patagonia, Aconquija, and El Impenetrable National Parks and expanded Perito Moreno National Park.

Are there risks that come with rewilding?

Removing the threats that put these ecosystems, their functions, and their natural beauty at risk is not enough to restore their original splendor. Before they donate the land, the rewilding team works to eradicate poaching and fishing, control and eliminate exotic species, remove livestock, and recover the soil used for forestry and plantations.

Iberá is a great example. Despite having achieved these goals, keystone species were still missing from their natural habitats. Many large mammals and birds couldn't recover simply because they were not there anymore. These species had to be reintroduced. That is the work that Rewilding Argentina set out to accomplish in Iberá, which became perhaps the most ambitious project of its kind in America.

They brought back large predators like the jaguar and the giant river otter, large seed dispersers such as the bare-faced curassow and the red-and-green macaw, and many other vertebrate species like the Pampas deer, the giant anteater, and the collared peccary.

This has since revolutionised traditional, passive conservation in Argentina. Today, many other species from different geographic regions have now Rewilding Argentina's reintroduction list.

In other words, bringing back keystone species to restore ecosystems is essential for our survival.

The rewilding process does go a step further though. It seeks to conserve what remains and recover healthy and functional ecosystems through the active management of habitats and reintroduction of key species. These species play fundamental ecological roles to the degree that their disappearance degrades and even drives natural ecosystems to collapse.

Degraded ecosystems no longer help alleviate the severe environmental crises we face today: biodiversity loss, climate chaos, and the appearance of pandemics. In other words, bringing back keystone species to restore ecosystems is essential for our survival.

Such an endeavor is unimaginable without political support to create parklands and reintroduce missing animals. So this is when local development appeared on the stage. Natural parks, open to the public, with high-quality public-use infrastructure and abundant, observable wildlife, allow for production diversification. At Rewilding Argentina, we name this progressive model "Economy of Nature."

A 700 thousand-hectare natural park was created in Ibéra. Locally extinct species like the giant anteater, the Pampas deer, and the collared peccary now thrive on these protected lands, with several well-established populations. The red-and-green macaw and the giant otter, extirpated entirely from Argentina, are returning to Iberá and are already reproducing, giving birth to new generations.

Rewilding Argentina is now reintroducing South America's apex predator: the jaguar. After ten years of hard work, the government and foundation together released the first six jaguars into these wild wetlands in 2021. Ten park entrances, or "portals," were then developed, linking the park with local communities, which today find prosperity in the same place where traditional extractive activities once didn't provide. Now, Rewilding Argentina replicates the model in the ‘Chacoan Impenetrable’ dry forests, the arid Patagonian steppe, and the Atlantic coasts of Southern Argentina.

The vision is to bring this model to even more regions of this vast country.

Our planet is suffering an unprecedented crisis caused by one of its species: humans. Biodiversity loss, climate change, and pandemics are intertwined and profoundly linked to the rampant destruction of the earth's natural ecosystems. Rewilding and the Economy of Nature are paths we can follow to halt the devastation of our only home.

Forget build back better - what if crisis is the new normal? | View