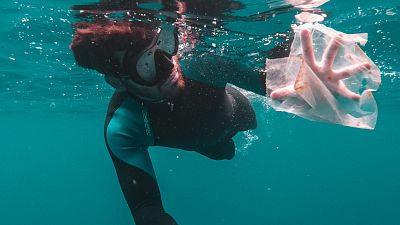 The amount of plastics which are dumped in the oceans annually poses a danger to our already endangered marine life   -   Copyright  Unsplash/Canva
By Sabrina Fearon Melville  •  Updated: 22/06/2021

Plastic waste is still one of the largest environmental concerns we face in the 21st century. But which countries dump the most waste into our oceans?

A recent report by packaging company RAJA reveals the top culprits worldwide producing the most plastic. India was found to be the worst country for plastic waste in the oceans in 2020, with some 126.5 million kg of plastic per year being dumped.

The weight of plastic waste dumped by India is equivalent to the weight of over 250 thousand bottlenose dolphins, one of the most commonly found dolphin species in the ocean.

Despite the United States producing double the amount of India’s plastic waste annually (42 billion kg), only 2.4 million kg of it ends up in our oceans.

In 2018 the Plastic Pollution Coalition reported that the United States had exported 157 thousand shipping containers filled with plastic waste, this was equivalent to approximately 1.07 million kg of plastic.

The plastic was shipped to some good quality waste-managing countries like Canada, South Korea and Taiwan. But larger quantities of waste were also shipped to countries with poor waste management systems such as Malaysia, Thailand and India, which took on 19 per cent, 10 per cent and 12 per cent of US plastic waste respectively.

When large countries like the US ship their plastic waste abroad they are able to claim it has been recycled. This fulfills the obligation for developed countries to effect a greater positive change for the environment.

Collectively, the top five plastic waste dumpers throw an astonishing 314 million kg of plastic into the ocean per year. So who are the top 10?

Why is plastic in our oceans such a problem?

Plastic pollution destroys our marine life and ocean biodiversity and countries with a higher GDP tend to cause the most damage.

Whilst plastic is a useful material and has many societal functions - its durable composition means that it takes much longer to break down.

For example, plastic microbeads (a mostly globally banned element normally found in cosmetics) cause harm to marine life and never biodegrade, thus affecting the environment long after they have been introduced to the water supply.

They also contain toxic chemicals which are consumed by fish and then can eventually enter the human supply chain.

How can we reduce our plastic consumption?

We can reduce our plastic consumption in a number of affordable ways but the easiest ones include replacing single-use plastics with reusable alternatives.

Buying a reusable water bottle or a reusable coffee mug saves you money in the long run and is good for the environment.

You can also purchase unpackaged goods from your local supermarket. Choosing to buy loose fruit and vegetables over pre-wrapped items can be cost effective too.

Ask retailers to send your items without the plastic packaging when requesting a delivery or better yet forgo the plastic bag when out and about and bring your own canvas version.