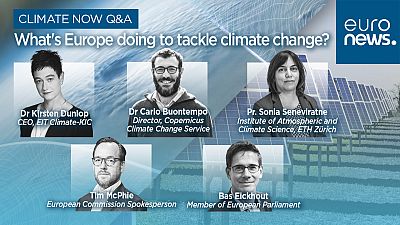 As world powers and polluters end a two-day climate summit with heavy promises to prevent the global warming crisis from spiraling -- are declarations enough and what are the current flaws in Europe's climate policy?

Rewatch our discussion with leading scientists, policymakers and entrepreneurship experts in the player above as we ask what Europe is doing to tackle climate change? The event was hosted by Euronews science correspondent and Climate Now series presenter Jeremy Wilks.

On Thursday, United States President Joe Biden pledged to slash US greenhouse gas emissions by 50%-52% from 2005 levels by 2030, an effort it hopes will encourage other countries to change their climate change targets.

"We need the United States, it's the second-biggest emitting economy in the world after China so if they don't do climate change policies, Europe can do whatever it wants, but they (the US) need to act as well," said Dutch MEP Bas Eickhout.

"I think the European Commission is absolutely leading at the legislative front but the United States is leading more on diplomatic power politics and I think both are required, and in that sense, it's very good to have the United States back."

The same day Biden said greenhouse gas emissions were the "existential crisis of our time," Copernicus released its landmark annual European State of the Climate report, highlighting just how bad the latest indicators of climate change really are.

The report shows how 2020 was Europe's warmest year on record and comes at the end of the warmest decade on record. Copernicus also reported greenhouse gas concentrations continue to climb.

In an attempt to prevent numbers from rising, the European Commission last year unveiled its ambitious €1 trillion Green Deal with the aim of net-zero carbon emissions by 2050 and a 50%-55% cut in emissions by 2030.

Transforming the 27-member bloc will be done through legislation on how energy is generated, transport, construction, manufacturing and food consumption.

"I think very much Europe is in the lead in terms of the legislative framework we're putting in place, we're very much a world leader," said Time McPhie, spokesperson for climate action and energy at the European Commission.

But he admitted: "It's a bit of an oil tanker, you don't turn it around overnight."

One of the main issues in reaching net-zero carbon emissions is the financial incentive.

"We've still got pension funds with massive investments in high carbon-emitting businesses because on the balance of evidence, it's where money can make a return."

Dunlop said that is just one of the issues, warning: "if we can't rule out the contradictions we've got a problem."

Getting EU members to agree

Getting all of the EU 27-member states onboard with legislation presents another issue.

"We still have 27 different countries doing their own thing. They don't like too much European coordination," said Eickhout, adding that change needs to happen at a national level.

He said while Europe has been good at setting legislations, an investment agenda for energy infrastructure is desperately needed.

"I think what we can fix pretty quickly is, of course, the energy sector. But then again, the big challenge here is the infrastructure to connect all the different possibilities of renewables. We have the potential, but we are not connecting it," he said.

But the biggest issue is housing, said Eickhout.

"If you look at the houses in the EU, they are still heating up outside air to a large extent...The commission is talking about it. But getting that done, that's really going to be a big challenge."

Not all doom and gloom

But businesses and politicians are listening to the grim scientific data on climate change.

"We have seen in recent years a number of these sectors actually tunning up and listening to not just listening to the data and being quite interested in doing more and adapting their business, adapting their activities to climate change," said Dr Carlo Buontempo, director of the Copernicus Climate Change Service.

While many businesses are taking on the data few European companies have implemented climate change strategies.

But even if the proper legislation is implemented to meet climate targets, we cannot reverse CO2 levels as it stays in the atmosphere for hundreds of years.

"There's no going back," said Professor Sonia Seneviratne of the Institute of Atmospheric and Climate Science, ETH Zürich.

As for if there is a chance for the world to survive if climate targets are met, "the door is still open but it's closing up and we don't have a lot of time," Seneviratne said.

"It's nice to have declarations... But this is not just more measures, we need radical change.

The Dutch politician is an MEP for the GroenLinks (GreenLeft) party and a fraction leader in the European Parliament for the European Greens. He is a fierce opponent to the reliance on fossil fuels.

Tim is the spokesperson for Climate Action and Energy at European Commission, the institution responsible for the European Green Deal which has set Europe on the path to climate neutrality by 2050.

Kirsten heads the EIT's Climate KIC, or Knowledge and Innovation Community, working to accelerate the transition to a zero-carbon and climate-resilient society. She advocates for deep systemic innovation, as well as technological change to cut CO2 emissions drastically.

Sonia is an IPCC co-author and expert in climate extremes, working at one of Europe's most prestigious universities. She investigates the processes leading to droughts and heatwaves, and how changes in land use impact regional climate.