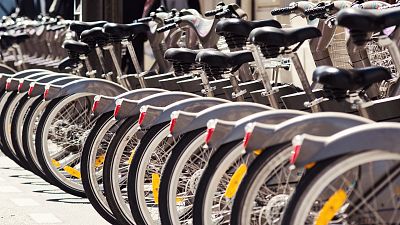 The number of bicycle users across Europe has soared throughout the COVID-19 pandemic.

At least 1,000km of cycle lanes have been created and €1 billion invested over the past year to address the continent’s increased demand. Structurally, there is still a lot to do. It’s estimated an even wider availability of cycle lanes could save thousands of lives across Europe.

But for some, cycling isn’t as appealing as it could be due to a host of safety and cost-related concerns.

Green tech companies are putting their resources into finding solutions to these problems in order to broaden the availability, cost, and environmental benefits of becoming a cyclist.

Here are some of our picks of the initiatives using technology to change this eco-friendly method of transport for the better.

An unfortunate reality of cycling is the lack of guaranteed security that comes with parking your bike in public. In 2020, almost 75,000 bikes were stolen in the UK alone.

Cycling insurance innovators Bikmo are keen to deter criminals and make prospective riders feel safe. In order to do so, they have just launched a comprehensive heat map covering bike thefts across England and Wales. It seeks to help people identify potential hotspots for reported thefts in order to make cyclists old and new feel as safe as possible on their travels.

The tool contains lots of useful information on the safest and most dangerous areas for people to leave their bicycles, as well as a month-by-month analysis of changes in your local area.

This Amsterdam-based bike manufacturer has created 120,000 vehicles since its inception and is responsible for the world’s first “affordable, high-tech, feature-rich e-bikes”.

Current features also include rider recognition, pedal-powered charging, and theft defence through alarms that activate when tampered with.

In an exciting development, the company announced that their S3 and X3 models are now some of the first to be compatible with Apple’s Find My network. Vanmoof riders will now be able to add their vehicles to their device’s location services, making them completely trackable.

What bike thief is going to want to be chased down by the vehicle’s angry owner?

People being able to keep tabs on the location of their vehicle could open up possibilities for better safety standards among cyclists on routes that aren’t as city-focused.

It’s no surprise that another Amsterdam-based company is featured on this list. After all, they are famous for their established cycling culture, with 515 kilometres of dedicated paths in the city.

Bike rentals schemes make it easier than ever to have regular access to cycling, and Swapfiet conducts this with a green focus. Customers can pay a monthly subscription for an electric bike that is delivered free, fully-insured and replaced almost immediately if stolen or damaged, eliminating the risks associated. The cost totals up as cheaper than any car, and is app based for ease.

They experienced a huge increase in demand over the past two years, enough that they’ve been able to take their business over to the likes of France, Belgium, and Italy.

4) A refreshingly sustainable approach to cycle wear from Vaude

The act of switching to cycling does wonders for the planet - we know this. What we know less about is how the materials put into making cycling a more comfortable experience for us aren’t always as eco-friendly.

German mountain sports manufacturer Vaude is at the forefront of creating cycle wear that is good for people and the planet. They use Ceplex Green Membrane technology to waterproof their cycling gear, composed of recycled or earth-based materials and free of environmentally-harmful fluorocarbons.

You can find recycled fabrics, wood fibres, and absolutely no PVC in their affordable, high quality cycling clothes and accompanying gear.

Customers can be assured they they don't have to break the bank for the sake of environmentally friendly sports equipment.