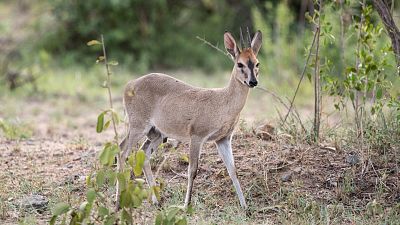 The first images of Walter’s duiker in the wild have been captured by The University of Oxford, UK.

Dubbed one of the world’s most secretive mammals, this small African antelope has never been viewed in the wild. Only 41 individuals have been found in the last few decades, embodied only by skulls and carcasses spotted in bush beat markets in Benin, Togo and Nigeria.

The animal’s name commemorates Professor Walter Verheyen, the first scientist to obtain a specimen of this species of duiker from Togo in 1968.

Until now, the International Union for Conservation of Nature (IUCN) has considered the species too poorly known to be able to evaluate its conservation status, assessing it as being “data deficient”.

But despite it being seemingly invisible, researchers at the top university in the UK have captured a “stunning picture” of the animal, published in the African Journal of Ecology.

The image was taken in Togo, after scientists at WildCRU (Wildlife Conservation Research Unit) used a remote camera to monitor Fazao-Malfakassa National Park for over 9,000 days.

Dr Gabriel H. Segniagbeto, Associate Professor of taxonomy and zoological systematic at Togo’s University of Lomé, describes how crucial it is that we protect these biodiverse areas.

The National Park is threatened by illegal activities such as hunting, cattle grazing, timber exploitation and bush fires, so conservation of the land is vital.

“It is critically important to recognise the importance of the protected area system of Togo, which acts as a vital stronghold for a rich diversity of wild mammals. We hope our exciting find – the first live image of Walters Duiker in the wild - will increase the call for further protection of our remaining forest and savannah,” says Segniagbeto.

Through monitoring the area so closely for such a long amount of time, the researchers also spotted other rare species, such as aardvarks and a mongoose called ‘cusimanse’, neither of which have previously been recorded in Togo.