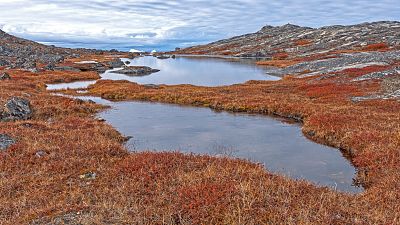 Tundra Ponds in the High Arctic near the Icefjord of Ilulissat, Greenland.   -   Copyright  Wildnerdpix / iStock / Getty Images Plus
By Rosie Frost  •  Updated: 19/03/2021

Around 125,000 years ago parts of the Arctic were covered with vegetation and shrubs. As climate change warms the region, scientists say it could become green once again.

Above the Arctic circle in northeastern Canada, Baffin Island is the fifth-largest island in the world. It has an average annual temperature below -9.5 degrees celsius and not much grows in this High Arctic Tundra. But, according to new evidence from the University of Boulder Colorado, that hasn’t always been the case.

Researchers have analysed hundreds of millennia-old plant DNA samples from the bottom of a lake located on the island. They used these sediment samples to create a “snapshot” of what plant species were living in the Arctic between 116,000 and 125,000 years ago.

The analysis led them to find that the dwarf birch, which is native to some Canadian ecosystems, had once grown 400km further north than it currently does. The study’s authors say that these findings may “not only be a glimpse of the past, but a snapshot of our potential future”.

“We have this really rare view into a particular warm period in the past that was arguably the most recent time that it was warmer than present in the Arctic,” says researcher, Sarah Crump.

“That makes it a really useful analogue for what we might expect in the future.”

The scientists say that though there are many models of how the Arctic’s ecosystems are changing, not many of them include the impact of these plants.

Crump and her colleagues point out that as the weather warms in spring and autumn, the shrubs can poke up above the snow turning the region dark green instead of white. This means the Earth’s surface would absorb more heat from the sun, speeding up the warming of the Arctic.

“As we think about how landscapes will equilibrate to current warming, it's really important that we account for how these plant ranges are going to change.”

Fossilised plants have also recently been discovered in a previously forgotten ice core, extracted from around 1.5km beneath a Greenland ice sheet. Analysed nearly 50 years after it was pulled from underneath the glacial ice, scientists found the well-preserved remains of twigs and leaves.

This discovery suggests that at some point in the last 1 million years, the area located around 1300km from the North Pole, may have been covered with boreal forest.

Greenland is at grave risk of melting, finds new #UVMResearch

The team says it means places like Greenland may be more susceptible to global warming than previously thought. Intact plant remains indicate that the ice covering the region could be relatively young in geologic terms and may have melted several times in the last million years.

“Greenland may seem far away, but it can quickly melt, pouring enough into the oceans that New York, Miami, Dhaka—pick your city—will go underwater,” explains study co-lead, Paul Bierman from the University of Vermont.

“This is not a 20-generation problem. This is an urgent problem for the next 50 years.”