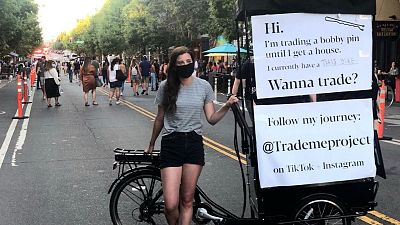 Demi Skipper promised to herself to keep trading until she get a house   -   Copyright  Instagram/Trade Me Project
By Doloresz Katanich  •  Updated: 24/02/2021

US-based Demi Skipper wanted to prove that she could swap her way from a hair clip to a house through an exchange system with strangers.

One year later, she is very close to achieving her goal.

Demi was sitting in her apartment in San Francisco at the start of the pandemic, when she watched a video that changed her life.

"I saw the story of the guy that had done it 15 years ago in Canada," she says, referring to Canadian blogger Kyle MacDonald who went from a single red paperclip to a two-story farmhouse over the course of 14 transactions back in 2005.

"I started researching everything about him, saw that nobody else had done it. And I was like, this feels like something I can do. And so honestly, I looked around the house and was like, what do I start with? What's the smallest thing I have? And I found that pin."

She started looking for somebody to swap with in a Facebook group.

"After a lot of people just being like, this person's crazy, one person replied. And she said, I'll trade you something, but you have to invite me to the house," remembers Demi. Her trade? A pair of earrings.

This first pair of earrings was shortly exchanged for four margarita glasses, before things really stepped up and Demi acquired a vacuum cleaner, an Apple TV, an electric bike food cart and even a tiny cabin, which she traded for a Honda CRV.

She is now completing her 28th trade.

"I don't know just how long it's gonna take. I'm turning 30, on June 30. I wish I could get this by my 30th birthday. But June is coming. So we'll see. I think though, with every trade, I'm more and more surprised."

Ever since, Demi has sent tens of thousands of messages and built a community of almost 5 million people on her TikTok channel.

Click on the video above to learn about Demi's ups and downs and what it really takes to trade your way from a hair clip to a house.