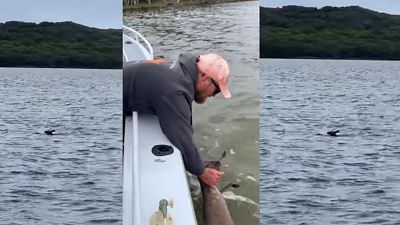 John Taylor and his family spotted a kangaroo in the middle of a lake in Western Australia   -   Copyright  John Taylor via Storyful
By Shannon McDonagh  •  Updated: 11/02/2021

A small kangaroo has been saved from hours of paddling by a family on a fishing trip in Denmark, Western Australia.

The national animal was spotted by John Taylor and his family whilst out fishing at the Wilson Inlet. The popular estuary is 14 miles long, and 5 metres deep in some areas.

At first, the family debated whether to rescue the kangaroo, and with good reason.

According to Bush Heritage Australia, the nationally symbolic animals are able to swim well using the support of their large tails, which proves useful for avoiding predators. Previous reports of similar situations show that kangaroos do not cope very well in wave-driven waters, which this estuary is subject to.

The kangaroo seemed to be tiring of the vast expanses of water, which led the family to act fast after observing its depth. After veering close enough, the animal was clearly thankful for the break, and floated alongside the boat while John gently supported it back to shore.

Despite being a popular fishing spot, the Taylor family appears to have been the only boat nearby at the time. They have since identified the kangaroo as a Western Grey, commonly found across South and West Australia.

“We noticed that the roo was tiring and its head was going underwater as it struggled to swim”, says John. “We then decided that we needed to help it - I was able to lean over to take hold of its leg and body.”

“We slowly made our way towards the shoreline, gently dragging, and assisting the exhausted animal to the shallows.”

“It certainly made for one of the most interesting catches that I have made on my fishing charters. It is, in fact, a first. The children were talking about it for the rest of the afternoon and was the highlight of their holiday, even for these Western Australian kids.”

The safety of kangaroos in Australia

Fortunately, the status of kangaroos in Australia is relatively safe. There up to 50 million across the country - which is double the number of people.

But despite the presumed safety of the species, WWF says there are a number of factors which still threaten them, such as deforestation and commercial hunting.

A growing number of measures are in place in order to keep the marsupials protected.