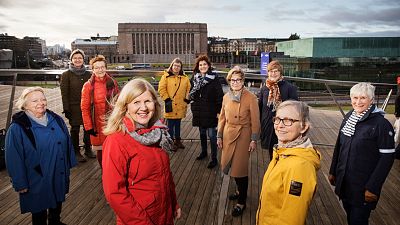 In the northernmost part of Europe, twelve Finnish grandmothers have created a group pushing for environmental change. Their aim is simple: to ensure their grandchildren have a safe and sustainable future.

The organisation, Aktivistimummot, meaning “Activist grannies”, now has over 5000 members in their Facebook group and has even received attention from politicians.

Anu Harkki is one of the founding members. Before she retired she worked in the environmental sector. She is now an ambassador for the EU Climate Pact, a Climate Reality leader for Al Gore’s NGO The Climate Reality Project, and, most importantly, she says, an ActivistGranny.

“We try to give real, science-based information about climate change, and create a positive feeling of how you can fight this and how you can change the world. And that it’s not a bad future, it’s a good future” Harkki says.

Before the pandemic, the activist grannies held in-person events and invited experts, asking them to give presentations about the climate and environmental issues.

“We deliver a lot of information about climate change - good examples of what to do and how to, you know, be a good citizen,” Harkki explains.

After the presentations, people would often approach the grannies and tell them the situation is much worse than they previously thought. Harkki describes the lack of public knowledge as “concerning” but understands that people are often too busy to properly engage with these serious, frankly depressing issues.

That is why education through fact-based research is so crucial to the climate debate, Harkki says.

And this isn’t just one opinion, it has been backed up by numerous studies. At Yale University in the US, researchers found that nearly 20 per cent of respondents said they were too busy to contact politicians to discuss climate change.

“They [people] are concentrating on the everyday issues, so they don’t have time to learn about these things,” Harkki agrees.

Due to Covid-19, it is not possible to organise the presentations anymore, so Aktivistmummot have switched to organising online webinars.

Their Facebook group continues to grow in popularity and is a mixture of old and young people. Not all members of the group are die-hard climate warriors, in fact Harkki has found that complete newbies join in search of information and answers.

“Old people don’t have very many possibilities to discuss these things, and learn new ways and new information. So it may have given them a way to learn more,” she says.

A future full of hope for young people

Aktivistimummot also wants to prove that a sustainable and fulfilling life is not necessarily difficult to achieve; that burning fossil fuels and living in a way that worsens climate change is not the status quo.

“When we look back at history, you know when we were kids, life was very different, but it was still good and happy,” she says.

Harkki says history has been kind to her generation, having been born to parents who suffered through World War II.

“We haven’t had any major catastrophes during our lifetime in Europe. So we have had, in a way, a very easy life. So we feel like it’s our responsibility to give that future to young people.”

The group’s main goal is to make Finnish people realise that the changes required to limit the effects of climate change are not bad. In fact, they make life better.

Through the Facebook group elderly people can share information and advice of different ways they can live a greener lifestyle. The grannies also collaborate with other organisations on different projects.

In October they worked with the Finnish 4H network to raise money to plant 10,000 trees.

“We want to give people an attitude of hope and a feeling of power, so that everyone can make changes and these changes will be good for us all.”

Grannies taking over the world

Separate from the work she does with Aktivistimummot, Anu Harkki is also an ambassador for the EU Climate Pact.

The Climate Pact has been meeting virtually during the pandemic, and it was at one of these meetings that she discovered that similar groups of elderly ladies protecting the climate also exist in other countries.

Maybe the next Greta Thunberg will have a little more grey hair?