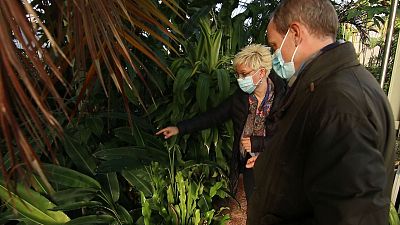 In this special edition of Climate Now, we take a look back at 2020, a year dominated by the coronavirus pandemic, and we bring you expert insight on the true state of our climate.

The latest data from the Copernicus Climate Change Service shows that 2020 was the joint warmest year on record, together with 2016. Temperatures around the globe were 0.6 degrees Celsius above the 1981-2010 average.

2020 also concludes what was the hottest decade on record.

The decadal averages from different scientific institutions since 1851 show that temperatures across the planet have clearly been rising for the past 40 years.

However, there were changes in our atmosphere in 2020.

The coronavirus pandemic created lockdowns all across Europe. Streets were suddenly empty, and the air became cleaner. Levels of nitrogen dioxide pollution from vehicles dropped by up to 50% in some places.

Those changes were not long-lasting, however. Richard Engelen from the Copernicus Atmosphere Monitoring Service knows why.

"If emissions go down, the concentrations go down, if emissions go back up the concentrations go back up. This is basically because these pollutants have a short lifetime in the atmosphere. They either fall back down to the Earth surface through rainfall for instance, or they react with other gases in the atmosphere, so their lifetime is limited," he explains.

Air pollution in 2020 rose and fell as the lockdowns came and went. Meanwhile, carbon dioxide emissions dropped by 7% last year. But what impact did that really have on our climate? Experts at the World Meteorological Organisation have the answers.

Euronews went to The Conservatory and Botanical Garden of Geneva to discuss the matter with CO2 emissions scientist, Oksana Tarasova. She told us that the dip in emissions due to the pandemic is not significant in terms of climate change. She says that "the levels of CO2 in the atmosphere, as well as the other key greenhouse gases, like methane and nitrous oxide, are all going up. So we haven't seen any decrease in concentration. So if you look at the curve it goes up and up and up, and 2019, and 2020 is not an exception, it still goes up."

CO2 causes the greenhouse effect. It gets its name from the way the gas traps heat inside Earth's atmosphere, just as the glass retains the heat in the Geneva Botanical Garden's tropical conservatory.

There are two greenhouse effects, there is "a natural greenhouse effect which stays, which was here before humans started doing any activities. And there is the human-induced greenhouse effect, which is related to our emissions. So when we emit additional CO2 or methane or nitrous oxide in the atmosphere, all those molecules which we add, they work as small heating machines," Oksana explains.

Plants have a very important role in regulating our climate, too. In fact, the biosphere takes up about 25% of human emissions of CO2, while oceans absorb another 25%. The exact amount absorbed can rise and fall year on year, according to different climate cycles, availability of water and nutrients for the plants.

One key question for scientists now is for how long this will last, as the climate changes. Tarasova continues: "If we at least stop deforestation that's good enough, because we already stop one of the sources of emissions, and if we start the reforestation, we can get some more uptake from the atmosphere. But how far we can go, that's completely unclear."

We're now on course to hit over one and a half degrees of global warming in the coming decades.

Climate systems also react very slowly. Changing habits won't have an immediate impact. As Maxx Dilley, the director of Climate Services Department at World Meteorological Organisation says, "it takes decades really for the climate system to catch up to what's in the atmosphere today. So the temperature pattern that we see globally is a product really of the greenhouse gas concentrations that we had in the atmosphere 30 years ago. And therefore it's going to take another 30 years before the climate system starts to approach an equilibrium based on the concentrations that we have of greenhouse gases in the atmosphere today."

Human activity means carbon dioxide levels are now at over 410 parts per million, up from a pre-industrial average of 280 parts per million. The implications of that rise are profound. Oksana Tarasova tells Euronews that the last time the Earth's atmosphere had that amount of CO2 was three to five million years ago. She points out that "during that time we had two to three degrees higher temperature, and 10 to 20 metres higher sea level. But there were no humans."

That's an overall picture of where the planet is right now. If emissions can be brought down towards zero, then the situation will slowly change.

So, the coronavirus outbreak has not changed the course of climate change, but it has taught us about our ability to act in times of crisis. As Oksana Tarasova says: "what the pandemic demonstrated to us is that there is a hope, in the sense that if we need to take action, we are capable to take massive actions".