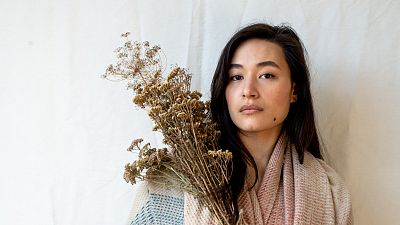 These cashmere scarves can be planted back into the soil after use   -   Copyright  Botanical Inks
By Doloresz Katanich  •  Updated: 22/12/2020

Imagine if cashmere scarves were 100 per cent biodegradable, if they could safely be given back to the soil at the end of their lifecycle, as biological nutrients.

One group of women at Botanical Inks and Bristol Weaving Mill have just made this a reality in the UK.

The limited-edition scarves were spun and dyed in Yorkshire and woven in Bristol. Botanical Inks has partnered with Bowmont UK, a specialist Mongolian-grade Cashmere farm in Devon.

The whole production process is rooted in history. Fabric is dyed with "traditional English heritage dyes which have been used for centuries in old England," says Babs Behan, the founding director of Bristol Cloth project & Botanical Inks.

"I used organic indigo leaf, which is the highest value natural dye in the world due to its complicated and laborious extraction," she explains.

The dyed yarn is woven by Bristol Weaving Mill in the UK’s greenest city.

Bristol won the award for European Green Capital in 2015, the same year the local weaving mill started operating - as the first industrial loom to open in the city in almost a century. This mill has become part of the Bristol Cloth project where the UK's first regenerative non-toxic textiles are produced.

By using natural materials for the colouring, like plants, minerals and insects, the fibre is completely safe to go back into the ground after use.

Click on the video above to learn more about the project.

The first ever human composting centre opens this year