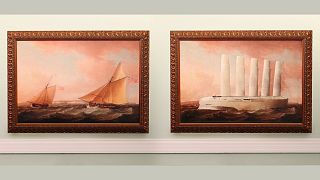 In Thomas Whitcombe’s A Trinity House Yacht and a Revenue Cutter Off Ramsgate (1810) cutters have been replaced with a striking sail-assisted cargo ship
By Katy Dartford  •  Updated: 11/12/2020

Iconic seascapes by famous 19th and 20th century artists have been reenvisioned to depict a sustainable, zero-carbon future for the maritime industry in an exhibition by viral Instagram artist Reuben Dangoor.

Dangoor created each of the pieces digitally and they are being showcased in the 360-degree virtual ‘Future Seascapes’ exhibition. It marks the launch of professional services organisation Lloyd’s Register Group and Foundation’s Maritime Decarbonisation Hub and is available to view on the company's website.

The joint initiative brings together thought leaders from across the globe to swap skills, knowledge and abilities. It is hoped that international communication will inspire the necessary advancements to design, develop and commercialise the future technologies needed for a zero-emission maritime industry of the future.

The first piece reimagined by Dangoor is JMW Turner’s Fighting Temeraire painted in 1838. One of the Romantic artist’s most celebrated works, the original famously depicts the last voyage of the iconic warship HMS Temeraire as it was towed down the Thames by a steam-propelled tug to be scrapped.

In the reworked masterpiece, the decaying HMS Temeraire is replaced with a carbon-emitting tanker of today, being towed by an electric hybrid tug.

The futuristic design aims to reduce the drag of vessels, improving fuel efficiency on the seas of tomorrow.

In Tingqua’s View of Hong Kong (1845-1855) the significance of trade in China has been transported to 2030. Zero-carbon bulk carriers and container ships powered by future-gazing sustainable fuels, such as ammonia and hydrogen, replace 19th-century vessels.

Vincent Van Gogh’s The Sea at Les Saintes-Maries-de-la-Mer (1888) features fishing boats powered by sail and oar, which already operate in a low-carbon fashion. In this image, Dangoor has incorporated renewable energy sources by adding an offshore wind farm - an emerging infrastructure and a pivotal part of the seascapes of a more sustainable future.

Emissions from shipping are a growing climate concern

“The Future Seascapes Collection has been an incredibly cool project for me to work on," said Dangoor.

"All of us need to play our part in tackling the climate crisis, so it’s great to see Lloyd’s Register leading the charge and setting an example to the wider maritime industry.”

Lloyd’s Register says shipping transports 90 per cent of all global trade and is critical to the world’s supply chain, especially critical during the COVID pandemic, but the sector's emissions are a growing climate change concern.

According to the European Commission, maritime transport emits around 940 million tonnes of carbon dioxide annually and is responsible for about 2.5 per cent of global greenhouse gas emissions.

The industry is determined to halve its emissions from 2008 levels by the year 2050.

Lloyd’s Register Marine and Offshore Director, Nicholas Brown said: “The ‘Future Seascapes’ exhibition is a showcase of how the Maritime Decarbonisation Hub can help drive the shipping industry towards its ambition by 2050."

"The paintings illustrate the accelerated advancements in technology that we believe the Hub can facilitate through collaboration and expertise.”