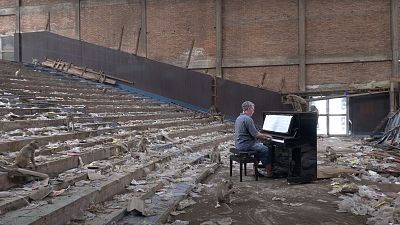 With the city empty of tourists, hungry wild macaques in Lopburi, Thailand, have been treated to a series of classical music concerts.

British pianist Paul Barton has been playing music for the monkeys after the coronavirus pandemic stopped visitors from being able to come and feed them.

“I saw a number of world news stories about how the macaques in Lopburi were not getting enough food due to the fact Thailand had closed its borders,” Paul tells Euronews Living.

“There was no longer the usual daily arrival of foreign tourists that came to have the experience of being up close to these wild and wonderful macaques and feed them.”

In the absence of tourists, the monkeys had begun fighting amongst themselves for the small amount of junk food that was available. The lack of food was making them aggressive and causing problems in Lopburi.

Paul wanted to use music to calm the animals down but also hoped that it would draw attention to the struggles they were facing. He played for them at four venues including an abandoned cinema, a car parts shop and the ancient Hindu temple they call home.

The pianist’s musical intervention seems to have worked.

“After a TV station broadcast our piano and macaques, local people in Lopburi started to appear behind the ‘monkey temple’ carrying bananas and bags of fruit for the macaques,” he explains. “People arrived with pick up trucks full of food.”

The monkeys aren’t Paul’s first animal audience. In the past, he has played for old, injured and retired elephants. Paul’s wife, Khwan, is a wildlife artist and the pair first developed a soft spot for the majestic animals after they served as the inspiration for her sculptures.

“As each sculpture took approximately two days, we ended up spending a lot of time up-close to each elephant,” says Paul. “We got to know the elephants well, their moods, and simply fell in love with them.”

While his wife worked on her art, Paul brought an electric keyboard to practice on. When Khwan asked what he wanted to do for his 50th birthday, Paul said “I would love to play piano for the elephants”. So they set up a piano in the middle of a field and eventually he went on to spend weeks serenading residents at the sanctuary with Beethoven, Bach and Chopin.

Sadly, Paul says this sanctuary has had to give the elephants he played for back to their previous owners due to Thailand’s lack of tourists during the pandemic.

“It's a huge privilege to be surrounded by these wonderful creatures, a guest in their country a guest in their home,” says Paul. “Just sitting still at the piano with them close by, listening or otherwise, is an unforgettable experience I feel very grateful and privileged to have had.”