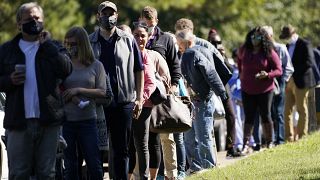 Voters brave a bright sun as they wait to cast their ballots in Mississippi, US.   -   Copyright  Rogelio V. Solis/Copyright 2020. The Associated Press. All rights reserved
By Rosie Frost  •  Updated: 19/11/2020

Over half a million climate-concerned voters cast their votes last week in the 2020 US election.

The Environmental Voter Project (EVP) targeted 1.8 million people who were worried about the climate crisis this year, but had rarely or never voted before. The project didn’t tell people who to vote for but instead had a much bigger goal in mind - to get enough people voting on environmental issues to convince the US government to take action.

As it says on their website, “politicians will always go where the votes are.”

More than 600,000 of the people they contacted across 12 states voted early in this election. The full impact won’t be known until final voter numbers are released early next year.

The EVP was founded by Nathaniel Stinnett five years ago when he realised that people who cared about the climate crisis didn’t tend to show up on election day. It is focused on creating “an army of environmental super voters”, he told the Huffington Post in 2017.

It is focused on creating “an army of environmental super voters”.

The project uses big data to collate a database of people it thinks are likely to put climate issues first. It then contacts these people via door-to-door canvassing, texts and makes phone calls to try and get them to go out and vote - without ever mentioning the environment explicitly.

Despite not endorsing any particular party, the EVP may have helped to push the candidate with the stronger environmental plan towards a win.

In the four closely contested states of Pennsylvania, Arizona, Georgia and Nevada, the margin of victory for President-elect Joe Biden was less than the number of new environmental voters.

Similar efforts by members of climate movements in the US also helped to turn out young people concerned about the environment. The Sunrise Movement says that it reached out to 3.5 million young voters during the 2020 election and overall youth turnout increased by around 8 per cent compared to the 2016 election.

Back across the pond, 94 per cent of Europeans say that protecting the environment is “important to them personally”.