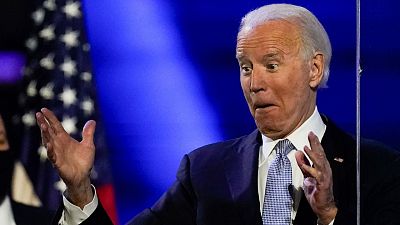 President-elect Joe Biden reacts as he stands on stage after speaking on Saturday.   -   Copyright  Andrew Harnik/AP
By Rosie Frost  •  Updated: 11/11/2020

If like us, you’ve spent the last week or so scrolling endlessly through Twitter, there’s a good chance you found out via social media that Democrat Joe Biden had been projected to win the US election.

After a long and heated few days, at about 5:30 pm CET on Saturday news networks around the world announced that Biden had won.

Twitter exploded as everyone from celebrities to world leaders rushed to express their feelings about the result. A common theme started to emerge, hope that a different administration would mean more action on climate change.

Greenpeace kicked things off with a classic 2020 meme:

The image on the left is from 2017 when the NGO unfurled a 21-metre banner from a crane above the White House to protest President Donald Trump’s “assault on the environment”.

The one on the right is a snapshot of footage from Black Lives Matter Plaza, Washington DC where crowds of Biden supporters gathered to celebrate on Saturday.

Extinction Rebellion took to Instagram with their striking statement.

“Today a climate change denier has been removed from one of the most powerful positions in the world,” the group’s caption read.

“This result has come from the organising efforts of the black community, indigenous peoples, youth and many more across the USA and around the world over the last 4 years.”

THIS IS HOW WE WIN When millions stand together in the streets for climate, for justice, for equality, and for the earth. We will win Today a climate change denier has been removed from one of the most powerful positions in the world. This result has come from the organising efforts of the black community, indigenous peoples, youth and many more across the USA and around the world over the last 4 years. We can win Today we stand in solidarity with those celebrating in the USA. We are living in a time of climate and ecological emergency, a global pandemic, and ever increasing inequality in society. It's time to act now. We must win CHANGE IS NOW #ChangeIsNow #PowerToThePeople #blacklivesmatter✊?✊?✊? #IndigenousRights #YoungPeople #Women #TransRights #uselection2020 #bidenharris2020 #Politics #election2020 #fucktrump #yourefired #ClimateEmergency #EcologicalEmergency #YouthStrikeForClimate #sunrisemovement #PowerToThePeople #CivilDisobedience #ClimateJustice #SystemChange not #ClimateChange #ActNow #ExtinctionRebellion

What did young activists think?

Many young environmental activists have spent the last couple of months of chaotic campaigning anxious about what the result of the election could mean for their futures. Biden's win was perhaps in part helped by what is being reported as the highest turnout of youth voters in US history.

When the results rolled in, they said the win was a “step in the right direction” but issued their followers with a call to action as well. The organisation is backing the Green New Deal, a series of ambitious climate policies which it isn’t entirely clear whether Biden is fully behind.

After declaring climate change as his "number one issue", he has instead developed his own ambitious $2 (€1.72) trillion plan and a goal to make the US net-zero emissions by 2050.

Zero Hour urged people to join them in ensuring that the President-elect backs the Green New Deal. The movement’s tweet thread read, “our organizing does not stop here.”

Ugandan climate activist, Vanessa Nakate uploaded a photo of a handwritten letter addressed to “Madam Kamala Harris and Mr Joe Biden”. She is hoping that through the power of Twitter, it will reach them both.

“Are you going to do everything you must to fight the climate crisis?” she asks, “Are you on our side?”

“Is that too much to ask? Not to destroy our only home and have a small group of people benefit from our pain and suffering.”

American youth-led climate organisation, the Sunrise Movement is optimistic but determined. “We f**king did it,” executive director, Varshini Prakash wrote in an email to supporters. Sunrise says that it managed to reach around 3.5 million unique young voters during the election.

“The presidential candidates with the strongest climate plan in history just won the White House with the most votes ever,” they wrote in Tweet.

But they don’t plan to let the President-Elect rest easy over the next four years; “we delivered for Biden, now it’s his time to deliver for us. He ran as a climate candidate, and he must govern as the climate president.”

Greta Thunberg reminded the world that though she may be a Nobel Peace Prize nominee, fearless climate leader, and inspiration to millions around the world - she's still a teenager ? The 17-year-old made a nearly 12-month callback to when current US President Donald Trump suggested the climate activist had an 'anger management problem' and needed to 'chill out' with a movie. As Donald Trump became increasingly irate on Twitter during the counting of the remaining ballots in this incredibly close presidential election, Greta took the opportunity to remind the president of his sage advice last December. #gretathunberg #gretamemes #gretathunbergmemes #donaldtrumpmemes #election2020memes #election2020 #howitstartedvshowitsgoing #howitstartedchallenge

'No time to waste': Biden introduces his climate team