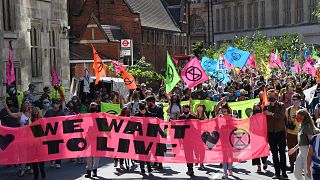 Starting in London’s Parliament Square, the activists have 10 days of demonstrations planned to highlight the urgency of the climate emergency. Protest events in other major UK cities such as Manchester and Cardiff will also take place, including a "carnival of corruption" and a "walk of shame" outside the Bank of England.

However, no boats or vehicles may form part of the processions this time, according to the Metropolitan Police. The new legislation comes after the famous XR boat bearing the slogan ‘Tell the Truth’ was moored to the tarmac of London’s Oxford Circus in summer 2019, in order to block traffic in the city centre.

Across Europe and the rest of the world the movement is picking up again as lockdown measures are lifted, with hundreds of thousands of people taking to the streets. From Poland to Australia, mass civil disobedience is taking place in the form of road blockades and sit-ins.

In Turkey, activists are supporting the protection of Mount Ida from a Canadian gold mine, protestors in Taiwan are marching to demand clean air and a cut in coal use, and ‘rebels’ in Helsinki have just finished a 12-day hunger strike.

As part of their demonstrations, Extinction Rebellion is fighting for the Climate and Ecological Emergency Bill (CEE Bill) to be passed in the UK. This is an alliance bill written by scientists, lawyers and activists, alongside support from businesses and charities, and has the potential to become the most significant move forward since the Climate Change Act 2008.

“This Bill outlines the path needed to avoid the catastrophe outlined by the United Nations...it is farsighted aiming to protect those at risk now and in the future,” said Kumi Naidoo, former International Executive Director of Greenpeace International and Secretary General of Amnesty International.

Protesting against the burning of the Amazon

Back in 2019, XR organised a protest outside London’s Brazilian embassy at short notice in response to the burning of the Amazon Rainforest.

Several hundred activists peacefully protested in front of the embassy as a public demonstration designed to put pressure on Brazilian president Jair Bolsonaro. In one Instagram post, XR posted a chilling animation of a burning pair of lungs with details of the event underneath.

“FRIDAY AT 11, YOUR NEAREST BRAZILIAN EMBASSY. We gather in outrage, in grief and in despair outside the Brazilian embassy tomorrow.”

Down at the Brazilian embassy, campaigner Kaija Coates told us she thought it was more important to attend protests rather than just “tweet and post about them on Instagram” as the crisis in the Amazon “is getting more and more pressing”. She went on to say that the setting of the Brazilian embassy was particularly important due to the need for government intervention.

“It exposes where corporate greed and capitalism meet environmental issues. It’s not just individuals’ responsibilities now, I think this is a real governmental issue.”

Saskia Martić, a 16-year-old school girl pictured here holding her poignant, maths-themed sign, spoke to us too. She explained how she had decided to become a campaigner after feeling she wasn’t learning enough about environmental issues in Geography at school, saying “I was just so angry about it”.

Saskia was inspired by Greta Thunberg and expressed her hopes for the future, after having collected her GCSE exam results the same week.

“I got my GCSE results yesterday and I was thinking, this isn’t the only result that is determining my future, it’s all this too. It seems inevitable that the world is going to end and we’re all going to combust into flames - but it’s really not. If we all made more of an effort, this doesn’t have to be our future.”

Numerous celebrities and public figures drew attention to the Amazon wildfires, due to a lack of mainstream media coverage at the time, by tweeting and posting on Instagram.