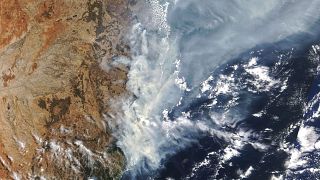 The extreme bushfires experienced in the Australian state of New South Wales (NSW) in 2019-20 are likely to become “more frequent” an inquest has warned, pointing at climate change as one of the key drivers.

It acknowledges though that the conditions in the area “are consistent with what climate change projections have been saying will happen”.

The NSW government is to adopt all 76 recommendations in the report, which revolve mainly around operational issues in tackling the fires more effectively.

Australia experiences a fire season each year at the end of the continent’s winter - but the 2019-2020 season was exceptionally severe, lasting for nine months up to March.

NSW was the worst-affected state. More than 11,000 fires destroyed 55,000 square kilometres, an area bigger than half of Portugal. More than 2,400 homes were destroyed, and 26 people died as a result of the fires, including a number of firefighters.

Sydney, the state’s capital, was issued a “catastrophic fire danger” warning in November, with temperatures reaching as high as 37 degrees Celsius. It was the first time the city had been rated at that level since the introduction of new fire danger ratings in 2009.

At the release of the report, the Deputy Premier of NSW John Barilaro said: “Last bushfire season was unlike anything we have ever dealt with before and we need a government response to match.”

The report took submissions from experts and officials over the course of a number of months, with one of the key themes of those submissions being climate change.

One quoted in the report states: “Countries that have the most means to address climate change but are internationally viewed as failing to pull their weight against it while indisputably contributing most per capita to it - countries that clearly have so much to lose from bushfires and other climate change damage and so much to gain from a more rapid transition to a renewable energy economy - must do more. Countries like Australia, and within them leading states like NSW.”

And the report contains a stark warning: “A range of evidence considered by the Inquiry indicated that extreme fires and fire seasons are likely to become more frequent, and therefore the State as a whole needs to do much more to ensure its people and communities are prepared.”

A planet on fire

Australia wasn't the only country to see an unprecedented fire season last year. In Brazil, there was an outcry at the lack of action over illegal fires in the Amazon, with countries offering international aid to battle the fires in what some call the "lungs of the planet".

This year there are fears the fires could be even worse, with the number of blazes in the Brazilian Amazon in July rising 28% compared with 2019.

And on 21 August this year, the Governor of California in the US pointed to the reality of climate change during a speech at the Democratic National Convention, as firefighters battled some of the biggest fires in the state's history.

Speaking from a forest near Watsonville, after visiting an evacuation centre, Gavin Newsom said: “If you are in denial about climate change, come to California.”

Seven things to learn on the Arctic from documentarian Louie Palu