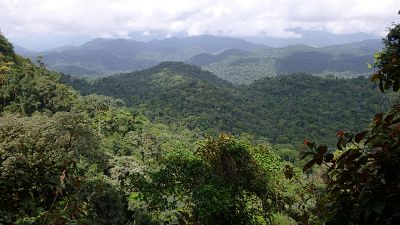 On 14th July the government announced that it would open up a section of the 141,706 hectare forest for logging. Greenpeace Africa called the plans “a massacre” and forest campaigner Sylvie Djacbou said that opening up tens of thousands of hectares of the pristine reserve to logging “would only exacerbate the global climate and biodiversity crises”.

In a statement on Tuesday, the Prime Minister withdrew a decree which sought to make around half of the forest the private property of the government. This would have turned the area into a so-called forest management unit allowing them to sell logging rights to the highest bidder.

Ebo Forest is essential to 40 communities of Indigenous Banen people who rely on it for food, medicine and cultural activities.

Chief Victor Yetina of the Ndikbassogog, a representative of an association of Banen community members and Dr. Ekwoge Abwe, manager of the San Diego Zoo’s Forest research project issued a joint statement about the withdrawal of the decree. They said they welcomed the announcement suspending plans for logging in the forest but were “concerned that its fate remains unclear”.

“This decision must be the first step towards recognition of Banen’s rights and forest protection. We call on the Government of Cameroon to adhere to its international commitments, and to promote participatory mapping and land-use planning with local communities.”

They added that any future reform to land ownership must have “full recognition” of the local communities’ rights at its core.

Greenpeace Africa and Rainforest Rescue say that they will continue campaigning until the forest is saved and the local communities’ rights are secured.

A win for rare apes

The forest has a diverse population of rare wildlife, including a unique group of tool-using chimpanzees. According to Global Wildlife Conservation, the Nigeria-Cameroon chimpanzee that lives in the area uses sticks to “fish” for termites and hammer-like stone tools and wooden clubs to break open nuts.

While both of these behaviours have been observed in other chimpanzee populations, this is the only place where they have been found to exhibit both behaviours together.

Chimpanzees are considered endangered by the IUCN Red List but the Nigeria-Cameroon population is particularly threatened. Between 3,500 and 9,000 individuals are left in the wild and around 700 of these live in the Ebo Forest.

It also makes up half of the Yabassi Key Biodiversity Area and is home to forest elephants, grey parrots and a potentially new subspecies of gorilla.