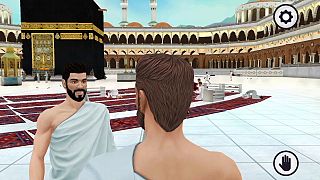 For the first time ever, the annual Islamic pilgrimage of Hajj is closed to worshipers from outside Saudi Arabia.

To open the experience up to Muslims around the world who are unable to attend, a German company are creating an interactive digital Hajj experience. Dubbed ‘Muslim 3D’, it may look like a video game, but is actually a virtual tour through Islamic lifestyle, history and rituals.

Usually millions travel to Mecca, the holiest city for Muslims, for five days of worship. The pilgrimage is a core tenet of Islam and it's mandatory for all Muslims to attend at least once in their life, unless they are physically or financially unable to travel.

But this year, the coronavirus crisis means instead of 2.5 million pilgrims, as there were last year, Saudia Arabia’s Hajj Ministry has restricted the number to between 1,000 and 10,000.

How does the digital experience work?

The creator of Muslim 3D is a company called Bigitec, in Bonn, Germany. Managing director Bilal Chbib says the idea for the virtual experience came to him over a decade ago as a way to blend his love of tech and video games with his religious and cultural upbringing.

"The idea basically came over ten years ago because my background is video game development and I'm a passionate video game player. And at some point, I was wondering why isn't there anything where I can explore my own culture and history," Chbib explains.

"And the products that I've been seeing, which at some point feature something that has to do with Islam, were mainly war games where the Muslims were the bad guys that needed to be gunned down."

Developing the programme was a careful process for Chbib, as he and his colleagues carefully used photos and motion capture suits to accurately replicate the process of a prayer animation.

This allowed the team to create a realistic version of the holy site of the Kaaba, the centre of the most holy mosque, Masjid al-Haram, in Mecca.

"You can relive this event virtually, basically," says Chbib, “that's something you can't convey through reading a book. This is something very special in video games that you can really create this immersive experience by visiting these places as if you were there."

Chbib doesn’t feel that his virtual Hajj offering is a substitute for the full pilgrimage, but does offer a way for people to experience the ritual remotely.

"I don't think it will be a substitute for going on an Islamic pilgrimage, because it's part of the ritual itself to be physically there, to wear the clothes, to visit the places that have religious significance for us. But it's definitely a tool to have this alternative to visit this place."

The digital experience could also allow environmentally-conscious people a way to feel connected with the pilgrimage each year, without having to travel every time.

Protecting the environment is a key philosophy in Islam, as Akeela Bhattay writes in the Independent, “for Muslims, the protection and maintenance of nature isn’t just a social responsibility – it’s also a religious one. According to the Qur’an, every human being is a steward of the earth, responsible for the care and wellbeing of nature in all its forms.”

In 2011, Dr Husna Ahmad, CEO of the NGO Global One, produced the first ‘Green Guide to Hajj’ in the world. Ahmad argues that younger Muslims especially are driving conversations around environmentalism.

“Muslims are becoming more aware of the responsibilities as stewards of this planet, especially Millennial Muslims who are very conscious of the environmental impact of our actions,” she argues.

So could this digital offering be a great way to help build a greener and more accessible Hajj for the future?

How has the Hajj pilgrimage changed amid the coronavirus pandemic?