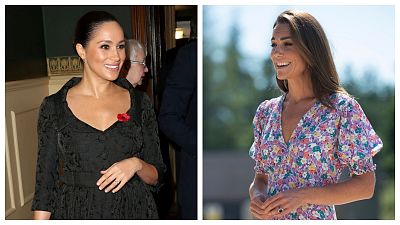 Both the Duchess of Cambridge and the Duchess of Sussex are known for their enviable designer wardrobes. But what are their most sustainable outfits?

The Duchess of Cambridge has been heralded for her tactful diplomacy when it comes to her outfit choices for significant occasions.

She has been described as a “fashion diplomat” - most notably for her decision to wear a navy lace dress by Canadian-born British designer, Erdem, on her royal tour arrival in Ottawa. Her outfit was accompanied by a red maple leaf hat and a diamond maple leaf brooch, said to have been borrowed from the Queen for the trip.

“Her clothes show respect, bring an emotional warmth that strengthens historic and strategic bonds, and send a positive message about the country and family she represents,” writes the fashion editor in the Guardian.

Kate is often seen in sustainable designers such as Alexander McQueen and Temperley London, usually alongside a pair of trusty L.K. Bennett nude court shoes. But earlier this week, the Duchess was pictured for the first time in sustainable brand, Faithfull, which creates "socially responsible garments".

Arriving in a mid-length floral dress by Faithfull, she visited a children’s hospice in Norwich, UK, to help plant a new patio garden.

In the past, Kate has also been known to champion ethical label Beulah, which exists as a brand to fight modern slavery. Beulah states that its aim is to empower vulnerable women through the business of fashion.

Founders Natasha and Lavinia were working in Delhi slums in 2019, in an aftercare home for women who had been trafficked into the sex trade, when they decided to start up the brand with an ethical purpose.

Here she is in a Beulah London Yahvi midi dress.

The Duchess of Sussex has also been celebrated for her advocacy of sustainable fashion, appearing in numerous ethical brands since entering the British royal family.

“She has consistently taken a classic and polished approach to dressing befitting her title. She also always found ways to bring a sense of personality to a royal dress code.”

Meghan Markle is often out and about in Stella McCartney, the first Kering brand to publish an annual environmental profit and loss account back in 2015 and a trailblazer for sustainability in the industry. She even wore a high-neck reception dress by McCartney on her wedding day.

The Duchess is a fan of sustainable luxury label Gabriela Hearst too, appearing at the Commonwealth Day Service at London's Westminster Abbey with a Hearst emerald satin bag.

But she's equally as comfortable in high-end high street brand Reformation, which reuses factory offcuts and reduces its carbon footprint by manufacturing much of its range close to where it is sold.

Some of Meghan’s other ethical favourites include Maggie Marilyn and Veja trainers.