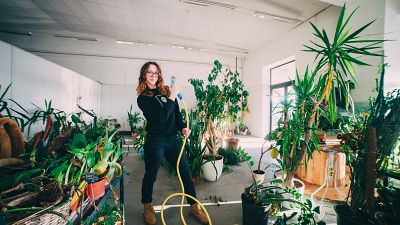 Aistė Virketė rescues plants that no one wants at her plant shelter in Lithuania.   -   Copyright  Aistė Virketė /Gyvybės Langelis
By Rosie Frost  •  Updated: 30/03/2021

What do you do when your houseplants become too much to manage?

Most of the time we leave them to dry out, die and eventually end up in the bin. In Kaunas, Lithuania, Aistė Virketė is one woman on a mission to give these unwanted and unloved plants a second chance - and help their owners while she’s at it.

It all started when Virketė was creating her photo studio. As a plant-lover, she wanted a green backdrop for her images, but she found buying them was incredibly expensive. Friends donated plants they no longer wanted but there were never enough. So she started looking elsewhere.

After internet searching, Virketė discovered that lots of people were giving away plants for all kinds of different reasons. Either they were sick, had grown too big, or simply didn’t suit the home they were currently in. Soon, her passion project became more about plants than photography.

She created Gyvybės Langelis, or ‘Window to Life’ - one of the first if not only plant shelters in the world. Two years later and Virketė now saves plants as her full-time job.

She has over 800 indoor plants in the dedicated space, which was lent to her by responsible business group Nuova.

While it is fine for now, this temporary workshop is too dark for the plants to flourish. That’s why, alongside her husband Evaldas, Virketė is crowdfunding to build a big greenhouse that will provide the best conditions for her rescues.

Plants can help people too

The new premises will also benefit the people who visit the plant shelter too. Virketė is a certified eco-therapist - she uses indoor plants to promote positive wellbeing and educate people about the environment. In the current space this isn’t possible, but she envisages a future for where the positive effects of being surrounded by greenery can be felt by all who visit.

Indoor plants have been shown to benefit our psychological wellbeing by improving our mood, reducing stress and increasing productivity. Studies from patients in hospital have also found that plants helped with their recovery as they reported decreased postoperative pain.

They can also clean the air around them. For plants to have a lasting impact on indoor pollution, there needs to be a significant amount of them housed in an environment with lots of light. Just like the greenhouse Virketė dreams of building.

The new space will give the plants a “respectable” profession, she says, where they can once again be needed by people. Virketė sees abandoned houseplants as a way of connecting people, especially children, with the importance of protecting the environment.