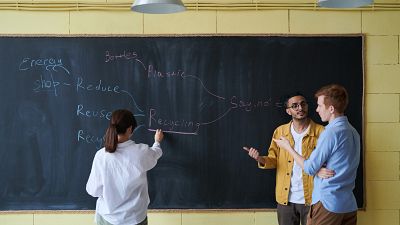 Students are studying the adaptability of the planet to understand how human actions have an impact.   -   Copyright  Pexels
By Rosie Frost  •  Updated: 28/05/2020

The University of Connecticut (UConn) in the United States has launched a course aimed at empowering its students to tackle the climate crisis with positivity.

The current state of the world as it faces the existential threat of climate change is enough to bring down anyone’s mood. Young people are particularly susceptible to feelings of negativity with over two thirds of 18-24 year olds in the UK experiencing ‘eco-anxiety’ according to Friends of the Earth.

“Based on what I read and what kind of literature is selling, there is considerable anxiety,” UConn professor of geoscience, Robert Thorson said in a release from the school. “The course’s role of ameliorating eco-anxiety is a benefit.”

Using an approach that includes the history of the planet’s eco-system, UConn’s new course called “The Human Epoch: Living in the Anthropocene'' focuses on highlighting the resilience and adaptability of the earth. Its main goal is to broaden students’ understanding of what is meant by the term ‘environment’ as well as aiding them in discerning which claims about climate change are true and which ones have been exaggerated.

The course focuses on highlighting the resilience and adaptability of the earth.

Combating that sense of hopelessness seems to have been a success. At the end of its first year, students have come out of the course with an overwhelming feeling of optimism about the changes that need to be made in the future.

“What is comforting to know is that the Earth will be relatively fine as long as it’s viewed through the context of whatever the current reality is,” Hayley Lambert, a student in the inaugural class. “I know everything will be okay as long as I don’t get too invested in what ‘okay’ looks like right now. The Earth will be fine and so will we, but our normal now is not going to be normal in the future.”

Is it normal to feel anxious about the state of the earth?

Experts say that ‘eco-anxiety’ isn’t a medical condition so much as a reasonable response to the growing threat of the consequences of the climate emergency. It is an awareness of the reality we are all faced with, which is becoming increasingly common as we learn more about the effects of human action on the environment and its resources.

That doesn’t mean you can’t battle these feelings of apprehension with positivity, however. Being aware of these feelings is the first step towards turning them into positive changes in your lifestyle. By teaching about the realities and positive effects of environmental actions, this one university has allowed students to emerge feeling as though they can make palpable, long-lasting change themselves.

“The main aspect I have changed in my life after taking this course is simply being more aware. I am now noticing more about our world and how I individually influence it,” said class member Anh-Dzuyen Le in feedback about the course.

“My biggest takeaways from this course are that we changed the planet, it continues to change, and every little thing affects another.”