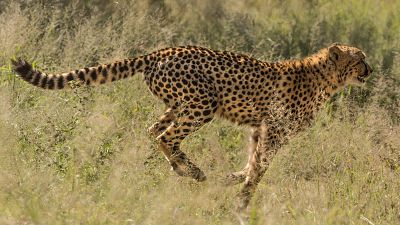 A new type of robot has just been developed to run like a cheetah. Inspired by the fastest land animal in the world, researchers at North Carolina State University have created ‘soft robots’ that are capable of moving more quickly on solid surfaces than any previous model before.

The new soft robotics can also grab delicate objects and are strong enough to lift heavy items. The robots are inspired by the biomechanics of cheetahs, namely the way their spines flex and extend as they run.

“Cheetahs are the fastest creatures on land, and they derive their speed and power from the flexing of their spines,” says Jie Yin, assistant professor of mechanical and aerospace engineering at North Carolina State University.

“We were inspired by the cheetah to create a type of soft robot that has a spring-powered, ‘bistable’ spine, meaning that the robot has two stable states,” says Yin. “Switching between the two states releases a significant amount of energy, allowing the robot to quickly exert force against the ground.” This enables the robot to gallop across a surface, meaning that its feet leave the ground, he explains.

‘Soft robots’ are mechanical robots which operate like living organisms. Rather than being made from rigid materials, they are built to have increased flexibility and an adaptability for accomplishing tasks. In the past, “soft robots were crawlers, remaining in contact with the ground at all times,” which limited their speed, says professor Yin.

The new, cheetah-inspired robots aptly fall into a class called LEAP (Leveraging Elastic instabilities for Amplified Performance). The robots break the previous record by reaching speeds of up to 2.7 body lengths per second, more than three times faster than older models. They can also run up steep inclines. When researchers attached a fin, instead of feet, the LEAP design also became the fastest swimming soft robot.

What are the cheetah-inspire robots going to be used for?

According to professor Yin, potential applications could include search and rescue technologies, where speed is essential, and industrial manufacturing robotics. “For example, imagine production line robotics that are faster, but still capable of handling fragile objects,” he says.

“We’re open to collaborating with the private sector to fine-tune ways they can incorporate this technology into their operations,” he concludes.

One example of how a soft robot can be used for emergency rescue is an artificial octopus developed at Bristol Robotics Lab in the UK. It searches for victims under collapsed buildings following an earthquake. “The robot can deform itself to squeeze into small gaps and ‘worm’ itself into the structure. When it finds a casualty trapped in the debris it can exert localised forces to create an air pocket,” says Research Lead, Professor Jonathan Rossiter.

Cheetahs are vulnerable to extinction

Cheetahs are perhaps best known for being the fastest land animals. An adult cheetah can accelerate at the rate of a sports car and sprint at up to 75mph. But the great cats are also highly vulnerable to extinction, says Dr Mark Jones, head of policy at conservation charity Born Free.

“Individuals range across huge areas; loss of habitat and diminishing levels of prey is bringing them into increasing conflict with people. In addition, cheetah cubs are trafficked out of Africa to feed a growing illegal demand for exotic ‘trophy’ pets, primarily in the Middle East.”

As a result, fewer than 7,000 mature adults are thought to exist across their African and Asian range, and populations are becoming increasingly isolated and fragmented, continues Dr Jones.

Cheetahs can run as fast as sports cars

Like all big cats, cheetahs are top predators, and are hugely important to the stability of the habitats and ecosystems in which they live. They need large areas in which to hunt, and don’t do well in captivity.

“It’s really important that we conserve cheetahs and other big cats by protecting their habitats, mitigating conflict with people, and bringing an end to the demand for and trade in live animals or parts and products derived from them. By implementing measures to protect cheetahs, many other species that depend on the same habitats will also benefit," Dr Jones concludes.