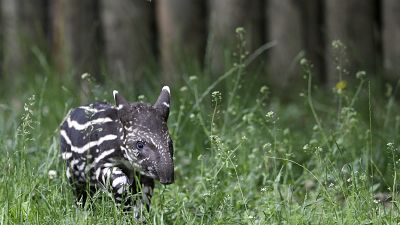 Conservationists in Brazil have released footage of a baby South American tapir, the first seen in Rio de Janeiro's forests in more than 100 years.

The project began in 2016 when Professor Fernando Fernandez of the Federal University of Rio de Janeiro came up with the idea of releasing 10 pairs of Lowland (or South American) Tapirs at Rio de Janeiro's Guapiaçu Reserve (REGUA) over a period of 3 to 4 years.

"Tapirs have been extinct in Rio since 1914," Professor Fernando told the AP news agency, "We are being able to establish a self-sufficient population."

Numbers of tapirs have declined due to the species being hunted for their meat and distinct hides. Deforestation and agricultural development have also damaged their habitats impacting already endangered populations. According to the International Union for Conservation of Nature's (IUCN) Red List of threatened species, the Lowland Tapir's status is 'vulnerable'.

Another shot of the baby tapir Born at Reserva Guapiaçu. #rewilding#reintroduction@NewsRewilding@RewildingShttps://t.co/doQiaduQ87

The calf, whose gender is yet unknown, is estimated to be around three months old. The gestation period for these animals is about 13 months and mothers only have one calf per pregnancy. Following this significant milestone for the tapirs in this region, conservationists in charge of the project are already expecting another birth later this year.

"The female who had the baby is Eva, she was the first reintroduced female in December 2017 and now had her first calf born in nature," explains Maron Galliez who coordinates the reintroduction programme, called Refauna project. "The other female we think is pregnant is Flora, who was reintroduced in June 2018, and we think she is now pregnant and will deliver soon," adds Galliez.

One of the most important reasons for the reintroduction project, these experts say, is to improve the quality of the Atlantic Forest. Tapirs play a critical role in the forest's ecosystem because of their enormous appetite for fruit. They have earned the title 'gardeners of the forest' due to the fact that they distribute large-sized seeds from the plants that they eat.

In December 2017, after five years of planning, the first three tapirs were brought from an animal breeding facility in Brazil's Minas Gerais state to Rio's Guapiaçu Reserve. The tapirs were fitted with radio-emitting collars which were monitored via satellite. Twenty camera traps complete the surveillance of the reserve which helps the scientists monitoring their progress to keep track of these newly settled animals. After reintroducing a few further tapirs throughout the last two years, they hope to bring five more to the area next June so they eventually have six females and six males.

The Refauna project continues to help other animals too

The project, headed by the Federal University of Rio de Janeiro (UFRJ), seeks to reintroduce native species to the Tijuca National Park. The park is located close to the city and is thought to be the world's largest urban forests.

Repopulation of this unique habitat is already well underway. The first animals released were agoutis, a cat-sized rodent that once roamed South American forests but that was driven close to extinction by hunting. A group of four howler monkeys were introduced in 2015 and last July, sixty tortoises, confiscated from animal traffickers, were also set free thanks to the project.

A long list of other animal species set to be reintroduced still exists in the minds of Refauna project members. The next is the blue and yellow macaw, to be followed by the Golden Lion Tamarin, the iguana and the collared peccary, also known as a "musk hog".

Click on the video above to see the tapir calf taking its early steps with its mother through Rio de Janeiro's Guapiaçu Reserve.