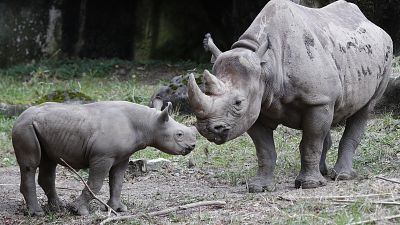 Conservation efforts seem to have paid off in Africa where the number of Black Rhinos is slowly increasing, though the species remains 'critically endangered', according to the International Union for Conservation of Nature (IUCN).

A new report shows that the species has made a slow recovery, with a population growth of around 2.5 per cent each year between 2012 and 2018, increasing the wild population from 4,845 to 5,630.

One subspecies, the South-Western Black Rhino, which was previously assessed as 'vulnerable' by the IUCN is now classed as 'near threatened', as it has seen "sufficient population growth of the last three generations".

Paula Kahumbu, wildlife conservationist and CEO of charity WildlifeDirect, is hopeful but cautious. She explains that despite the success of the Black Rhino, other sub-species are still under threat, like the Northern White Rhino, of which there are only two individuals left.

An international team is currently working on a project to create embryos using eggs collected from the two remaining females and frozen sperm extracted from males before they died which they hope will prevent the White Rhino from going extinct.

To maintain the population increase, some rhinos have been moved elsewhere to avoid interbreeding. But relocating these animals can be dangerous; in June 2018, a group of eleven Black Rhinos died after drinking saltier water than they were used to in their previous habitat.

Managing this threat is expensive. Karkloof Nature Reserve and Wildlife Sanctuary, a thirty-minute drive from Pietermaritzburg in South Africa, uses advanced surveillance technology and artificial intelligence to enable rangers to react more quickly to poachers. The private park is also equipped with CCTV cameras and facial recognition technology to deter poachers and this constant vigilance has proved to be effective.

However, as the population increases, the main concern becomes the lack of space, as the needs of wildlife compete with human development.

Click on the video player above and learn more about the Black Rhinos.