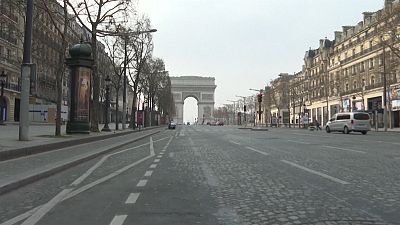 Streets are empty, cities are silent, factories are closed and skies are quiet. Surely this has to be good for the environment? We ask the experts for the facts, and set out the differences between short-term changes and long-term trends in this month's episode of Climate Now. First though, a quick look at the latest data for March from the Copernicus Climate Change Service.

Here in Europe in March, average temperatures were almost two degrees Celsius above the 1981-2010 average.

Those same areas were also drier than might have been expected; soil moisture and relative humidity are down for the time of year.

The month of March is a good time to look at ice in the Arctic, as it's the time when sea ice cover is at its annual peak. Generally, the trend is down; the below graphic shows anomalies since 1979, and reveals that there is 6% less sea ice than might have been anticipated, although there's plenty of variability, too.

For example, in the below map of the entire Arctic region, the areas in red are ones where there is less ice than would be expected for this time of year. But around Svalbard, there is actually more ice than you would expect.

Covid-19 vs. the environment

There has been much talk in the media about the potential climate impact of the coronavirus-related shutdown.

Europe has come to a virtual standstill, with the majority of countries in some kind of lockdown. Many assume that this is good for the environment.

Data from the Sentinel-5P satellite shows that nitrogen dioxide air pollution levels have plummeted across Europe since the pandemic. NO2 is emitted in most cases by burning fossil fuels at high temperatures, as in internal combustion engines. However, Vincent-Henri Peuch, Director of the Copernic Atmosphere Monitoring Service told Euronews that the importance of the drop should not be overstated.

"I don't think we can say that there is any long term significance in this decrease. However, in the short term I think these decreases are useful. The level of air pollution is affecting cardio-pulmonary health in general, so having less pollution at a time where this virus is around can only be a good thing," he said.

There could also be another potential benefit of today's lower air pollution; there's a chance that Covid-19 may be transported and remain viable on particles of pollution. As yet there is no scientific consensus on this issue, but Alessandro Miani, President of the Italian Society of Environmental Medicine, certainly thinks it's a viable theory:

"Particulate matter, when it’s at a certain density and there is a lot of smog, a lot of atmospheric pollution, can be considered a sort of highway for the acceleration of the epidemic," Miani told Euronews via videoconference.

Short-term air pollution, which lasts for a few hours or a few days in the atmosphere, has dropped, and that is considered positive news.

However, despite the economic slowdown, greenhouse gases are still being emitted. Indeed, Oksana Tarasova, Head of Atmospheric Environment Research Division at the World Meteorological Organization, says carbon dioxide levels in the atmosphere are still at record highs:

"If we look at how the levels of atmospheric CO2 are formed, it's not annual emissions in particular which are controlling the levels; it's the whole accumulation of CO2 in the atmosphere since pre-industrial times which actually form the current level.

"So, the reduced emissions within one particular year of this scale are very unlikely to have an impact on global levels of carbon dioxide," she explained.

Tarasova is stressing that one has to grasp the difference between a cut in emissions - something some countries will see this year, even if it's only a small percentage reduction - and the actual levels of greenhouse gases in the atmosphere. We would have to look back many millions of years into the past to find CO2 concentrations as high as they are now, and at that time sea levels were tens of metres higher and average temperatures globally were several degrees warmer.

The Covid-19 pandemic has had an immediate impact on our home and work environments, but when it comes to THE environment, the picture is far less clear. Vincent-Henri Peuch believes the current situation may have a big influence on our approach to pollution, moving forward:

"The lessons learned once we will have this crisis behind us will be very important to (rethink) the problem of air pollution," he says. "Unfortunately climate change will still be around and will not really be changed by this crisis."

Will summer weather stop the pandemic?

There have been a lot of questions about whether the virus will disappear once the summer weather comes in the northern hemisphere. The answer isn't clear, we don't have enough information yet, and there are so many variables, including how we all behave in our daily lives.

However, the idea that temperatures above a certain level can destroy or prevent coronavirus are very much among the myths circling around the virus - and one that Oksana Tarasova's colleagues at the World Meterological Organization are doing their best to counter: